With just over a week before the start of the Olympic Games in Rio de Janeiro, a new poll shows most Brazilians see the sporting event generating more losses than benefits for the country.

A Brazilian jet fighter crashed into the ocean off the coast of Rio de Janeiro on Tuesday afternoon, after it collided with another jet during a military exercise.

The Brazilian mother-in-law of billionaire Formula One chief executive Bernie Ecclestone was kidnapped on Friday in the country’s largest city.

With just 10 days to the opening ceremonies, some delegations have abandoned housing at the Olympic Games, amid complaints of abysmal living conditions, in what is turning into an embarrassment for the host city.

Over at the BBC,

At the Bubble,
Part of the Argentine Olympic delegation won’t be staying in the Olympic Village due to the poor state of the accommodations. Coaching staff and officials will go to nearby apartments.

All-Seeing Eye In The Sky Will Watch Over Rio Olympics…

And more,
Brazil Fights Another Epidemic Before Olympics

The equestrian world is buzzing about a Brazilian outbreak of glanders disease, a deadly equine respiratory condition, ahead of the Rio Games.

While no one at the DNC mentioned ISIS in yesterday’s speeches, two Islamists stormed into the church in Saint-Etienne-du-Rouvray near Rouen during mass shouting Allahu Akbar, and beheaded Fr. Jacques Hamel, age 84.

There are also reports that one of the attackers was a local resident who was under electronic tag surveillance having been jailed in France for trying to travel to Syria in 2015. His bail terms allowed him to be unsupervised between 8.30am and 12.30pm – the attack happened between 9am and 11am.

Today’s attack is the latest to hit Europe in what has been a year of bloodshed on the continent:

July 24:Festival suicide bombing – A failed Syrian asylum seeker set off an explosive device near an open-air music festival in the southern city of Ansbach that killed himself and wounded a dozen others.

The 27-year-old had spent time in a psychiatric facility, while the regional authorities said an there was ‘likely’ a jihadist motive for the attack.

However a spokesman for the interior ministry later said there was as yet ‘no credible evidence’ of a link to Islamic extremism.

July 24: Knife attack – A Syrian refugee was arrested after killing a Polish woman with a large kebab knife at a snack bar in the southwestern city of Reutlingen, in an incident police said did not bear the hallmarks of a ‘terrorist attack’ and was more likely a crime of passion.

Three people were also injured in the assault, which ended when the 21-year-old assailant was deliberately struck by a BMW driver, believed to be the snack bar owner’s son, trying to stop the man.

July 22: Munich mall mass shooting – David Ali Sonboly, 18, shot dead nine people at a Munich shopping mall before turning the gun on himself, having spent a year planning the rampage.

Police said that the German-Iranian was ‘obsessed’ with mass killers like Norwegian right-wing fanatic Anders Behring Breivik and had no links to the Islamic State group.

July 18: Train axe attack – A 17-year-old migrant wielding an axe and a knife went on a rampage on a regional train, seriously injuring four members of a tourist family from Hong Kong and a German passer-by.

ISIS group subsequently released a video purportedly featuring the assailant, named by media as Riaz Khan Ahmadzai, announcing he would carry out an ‘operation’ in Germany, and presenting himself as a ‘soldier of the caliphate’.

He is believed to have been Afghan or Pakistani.

July 14: Tunisian Mohamed Lahouaiej Bouhlel ploughed a truck into a crowd of people celebrating Bastille Day in the French Riviera city of Nice, killing 84 people and injuring over 300.

The Nice attack was the third major strike on France in 18 months and was claimed by ISIS.

March 22: Suicide attacks claimed by ISIS kill 32 people and wound more than 300 at the Brussels airport and Maelbeek metro station, near European Union offices. They appear to have been carried out by members of the same cell that committed attacks in Paris four months earlier.

November 13, 2015: Coordinated suicide attacks in Paris kill 130 people and wound more than 350 at the Bataclan concert hall, cafes and the national stadium. ISIS claims responsibility for the attacks.

UPDATE
The Daily Mail confirms that the Islamist knifemen forced priest, 84, to kneel and filmed his death as they slit his throat

Two ISIS knifemen who stormed a church in Normandy forced an elderly priest to kneel before filming themselves butchering him and performing a ‘sermon in Arabic’ at the altar, a terrified witness has revealed.

Opposition leader María Corina Machado went to visit the Hospital Central de San Cristóbal, where a reported 154 babies have died due to the severe shortage of medical supplies and medications. A crowd of chavistas tried to prevent her from entering, and the above video reports that, in addition to shoving and hitting her, a shot was fired and members of the mob threw molotov cocktails.

Scene 2:
For the third weekend in a row, Venezuelans crossed into Colombia to buy food,

Some Venezuelans traveled hundreds of miles through the night on long-distance buses to make the crossing during the weekend openings. They hugged Colombian border guards and wentracing for the supermarkets. Stuffing suitcases and duffel bags with as many items as they could fit and their bolivars could buy, they went home with sacks of rice, sugar, corn meal and milk powder, like sailors preparing for a long voyage at sea.

It was a short reprieve. In recent days, border traffic has been much more limited. Colombian authorities — worried the growing crowds could spiral out of control — say they want to end the ad hoc crossings and reopen the border on a long-term basis.

How are they paying for this? Miguel Octavio posits,

Let’s say the average Venezuelan carried US$100 in Bolivars across the border. This turns out to be US$ 13.5 million. Believe it or not, this is a large amount in Venezuela these days for the black market. Thus, I have no idea how the Colombian merchants could possible hope to convert this money back into Pesos or US$ swiftly. Moreover, I don´t see how they could have done so without the paralell [sic] rate of exchange increasing significantly.

But there has been little movement on the black market rate so far.

So, what gives? How did they do it? Because these border people are sophisticated when it comes to taking currency risks. They just don´t do it!

My guess at this time, absent any other theory, is that it may have been the Venezuelan Government that provided the hard currency. Since the Government planned the opening, prepared this sort of relief valve, it must have been aware of the possible pressure on the black market and excess liquidity and provided funds to the money exchangers at the border. This not only make sense, but lest you think that they are too dumb for that, remember that when it comes to guisos and graft, these guys are the best there is. I welcome any other alternate explanation.

As long as #Maduro stays in power children will continue looking for food in garbage. #TibisayTienesHastaMañana pic.twitter.com/Zk9QFVajkN

Nephews of Venezuela’s first lady confess attempt to smuggle 1,763 pounds of cocaine into the U.S.

During the meetings, Campo allegedly brags about owning several Ferraris and being at “war” with the U.S. and Venezuela’s opposition. He also describes high-level connections with the government that will make it easy to move drugs through Caracas’ international airport and prevent any cocaine-laden plane from being follow by law enforcement because, he said, “it departs as if …. someone from our family was on the plane,” according to a statement by U.S. attorneys for the southern district of New York.

In the court filings, Campo first suggested to agents that the cocaine deal was to fund Cilia Flores’ congressional campaign.

In other news,
Colombia’s Guerrilla Quietly Migrate to Venezuela ahead of Disarmament. Colombian Guerrillas Moving Some Activities Near Venezuela Border, Where Children Are Easy Recruits

Linked to by The Pirate’s Cove. Thank you!

Rather than the full-hemisphere Carnival of Latin America and the Caribbean, today’s Carnival focuses on the upcoming Olympics in Rio de Janeiro, which are scheduled to start in eleven days.

The condoms:
Rio Olympics: Brazil to give out 9 million condoms free (which inspired the new logo above)

The Russians:
IOC decides not to ban full Russian team from Rio Olympics

Members of the executive board met on a conference call Sunday and granted authority to the 28 individual federations that govern each sportto rule on which Russian athletes should be permitted to compete in their respective disciplines.

With the country facing a record budget shortfall, a new currency may undermine confidence in the monetary system, said Steve Hanke, a professor of applied economics at Johns Hopkins University, who advised Ecuador on adopting the dollar in the late 1990s and early 2000s. His concerns were echoed by Ruth Arregui, a former general manager at the central bank, and the University of Georgia’s Myriam Quispe-Agnoli, who wrote about dollarization as an economist at the Federal Reserve Bank of Atlanta.

“Young people: avoid mediocrity like the plague. They bring us Steve Hanke to insult our intelligence . . .”

“. . . the “gringo Cavallo” (with apologies to Cavallo). His CV: advisor to Abdalá Bucaram, Carlos Menen [sic] and a number of former Soviet republics that . . .”

“. . . brutally embraced neoliberalism. His “pearls of wisdom”: “inflation would have been worse if it weren’t for dollarization.” That is, Colombia . . . .”

“. . . devalues when it feels like it.
It’s really embarrassing.
But this is just the beginning. Let’s strengthen the stomach.
To victory always!”

About that last tweet, I can’t say that I understand what, if anything, Colombia has to do with Ecuador’s new electronic currency, what Correa is embarrassed about, or what is “just the beginning.”
“A fortalecer el estómago” (Let’s strengthen the stomach) may (or may not) be the equivalent of “gird one’s loins,” but again, what about?

But I do know that ¡Hasta la victoria siempre! is the motto of the Cuban communists, and of Che Guevara. 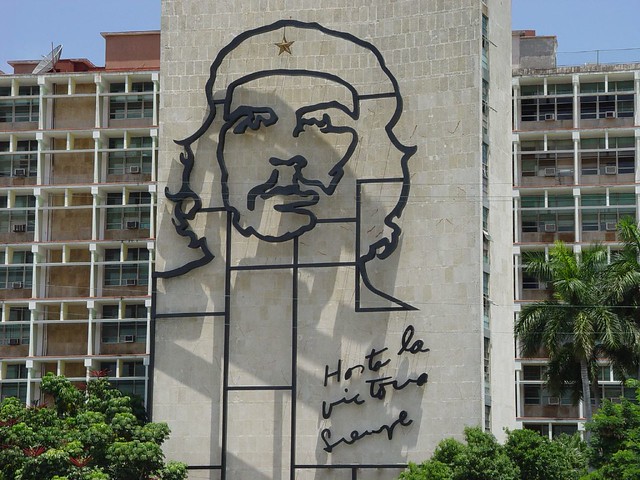 and Bloomberg news spells it out for you (emphasis added),

Trump has the POTUS in defiance mode?

I’ll add video if I find the full press conference.

Spanish-language media is having hissy fits over Trump. Jaime Bayly, for instance, called the RNC “this picturesque event, this convention of lunatics, this witches’ sabbath of warlocks and medicine men” – and that was just during the first minute of Tuesday’s show (it goes down from there).