This, in addition to the Australian Paralympian team getting mugged at gunpoint, the shootouts over the drug lord who escaped from the hospital in a helicopter (that the police couldn’t chase since they don’t have a working helicopter) and who is still at large, the dead jaguar, and the Zika. So far, only 70% of the tickets have been sold.

No wonder the cops and the firemen are holding up “Welcome to hell” banners at the airport.

Although it’s become a minor hobby of mine chronicling all that could go or is going wrong with the 2016 Rio Summer Olympics, I have to admit that I wasn’t expecting a “dismembered corpse/beach volleyball” story. Who’s in charge of the Rio organizing committee, Stephen King?

By the way, the hospital in the drug lord incident is one of the hospitals recommended for tourists attending the Olympics.

So, yes, Stephen has a good question.

UPDATE
Jim Hoft posts, Rowers, Swimmers at Rio Olympics Will Compete in Raw Sewage from Toilets – 1.7 Million Times Above Hazardous Levels; as it turns out, the Brazilian government does not test for viruses.

If this is true, it is crime at the highest levels, involving Venezuelan oil, the government of Puerto Rico, PREPA, and Puerto Rico’s FBI office and U.S. Attorney:

Richard Lawless, CEO of Commercial Solar Power, Inc., a company that was reportedly forced into bankruptcy by actions of the Puerto Rico Electric Power Authority (PREPA), which has been used to redirect as much as $100 million a year from the people of Puerto Rico to select government officials, asks, Did FBI and Justice Dept. Enable Puerto Rico’s Financial Meltdown? The FBI and DOJ stood by while government officials in Puerto Rico committed $11 billion dollars in financial fraud

On February 24, 2015, a private lawsuit was filed using the Racketeer Influenced and Corrupt Organizations Act (RICO), claiming government officials at PREPA stole over one billion dollars in public money over 10 years and committed one of the largest municipal bond frauds in United States history.

Some months ago, I received a call from a man stating he worked for the U.S. government, inferring he was with the Central Intelligence Agency (CIA).

I was told that Puerto Rico came on his agency’s radar years ago because the head of the PREPA fuel purchase office started making direct calls to the then-president of Venezuela, Hugo Chavez. An agency listened in and found out that PREPA was buying sludge oil from Venezuela and billing the utility for high grade oil. The difference in value—hundreds of millions per year (today it would be $700 million a year and is said to be still going on)—was allegedly kicked back to the fuel office manager and distributed to politicians and government officials on the island.

As the unnamed government agency continued to listen in on the calls, the caller claimed it became clear that family members of Puerto Rican FBI agents and family members in the Puerto Rico U.S. Attorney’s office were receiving payments based on these “kickbacks.”

He went on to tell me that the Puerto Rico’s FBI office and U.S. Attorney will do nothing about the oil kickback scheme and the bond rating scheme because they were participating in it.

Then there were the bonds,

Investors allowed PREPA to issue bonds. Then, PREPA borrowed from private banks to pay the bond’s interests, then borrowed from the Government Development Bank (GDB) to pay back the private bank loans. The GDB, in turn, issued more bonds to refinance all. Afterwards, PREPA would issue a new debt to pay GDB’s outstanding interests, pay principal and pre-pay the new bonds’ interests for several years—a cycle that is repeated over and over—and in which the original debt is never paid, the report outlined.

“This practice could constitute a fraud scheme for which the federal agencies that regulate financial instruments and the Security Exchange Commission could take action against and/or pursue civil suits against these institutions,” the report concluded.

On Monday, a senior source in a related U.S. government agency, speaking toCaribbean News Now on condition of anonymity, confirmed almost word for wordwhat I had apparently been told.

This does not bode well:

‘Welcome to Hell’, Brazil police tell Rio tourists at airport ahead of Olympics. With the Olympic Games a month away, police in Rio de Janeiro voice concerns over dangerous lack of resources. 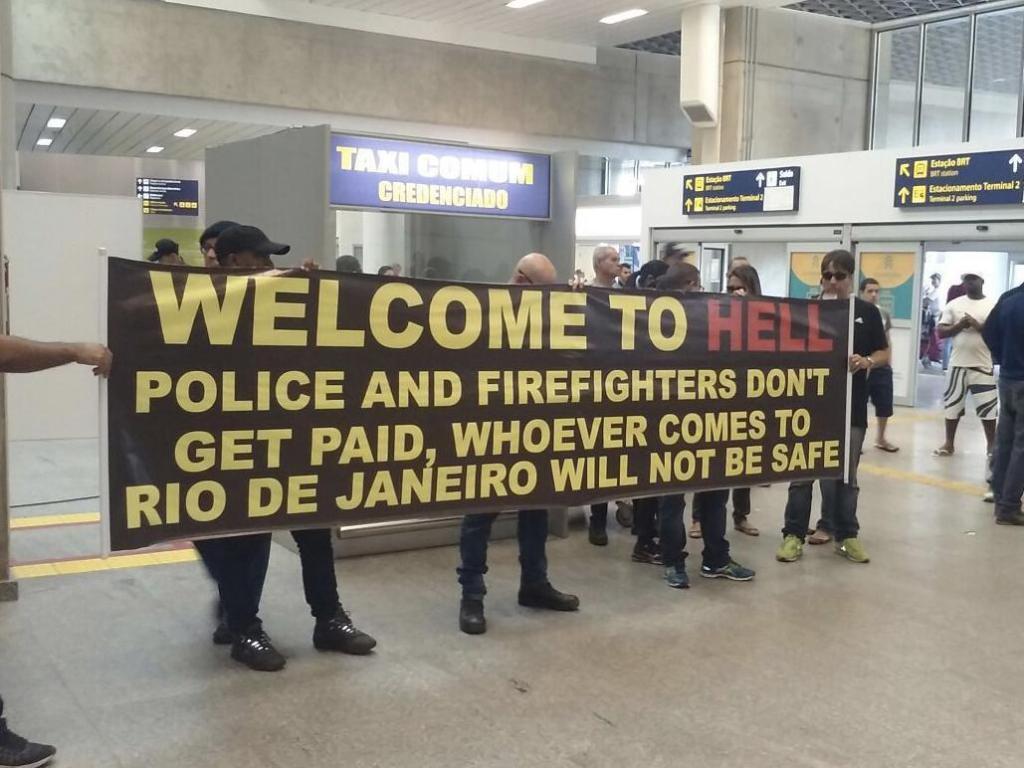 IBT has the details.

Venezuela’s oil output, already the lowest since 2009, is set to slide further this year as contractors scale back drilling after the cash-strapped country fell more than $1 billion behind in payments.

The Latin American nation’s oil production, which generates 95 percent of export revenue, will decline by about 11 percent to 2.1 million barrels a day by the end of the year, Barclays Plc estimates. Output is falling largely because oil-services companies aren’t being paid, according to the International Energy Agency

Venezuela owes US$1.2 billion to Schlumberger, and $756 to Halliburton, while Saipem SpA has idled all but 3 of 28 rigs in the country.

Back in 2002, Hugo Chávez fired 18,000 of PDVSA’s workers – approximately 40% of the workforce for political reasons. Oil production has precipitously declined since.

The high court will review a May 2015 ruling by the U.S. Court of Appeals for the District of Columbia Circuit that allowed one of the claims made by Oklahoma-based Helmerich & Payne International Drilling Company to move forward.

The company sued both the Venezuelan government and state-owned oil companies under a U.S. law called the Foreign Sovereign Immunities Act, saying among other things that the property seizure violated international law.

Helmerich had long provided drilling services for the Venezuelan government. The company disassembled its rigs in 2009 after Venezuela had failed to pay $100 million in bills. In response, Venezuela’s government seized the properties, which were still in the country. Then-President Hugo Chavez ordered the seizure, saying the rigs could be used by the government-owned companies.

Colombia granted its first production and export license for cannabis derivatives to a Canadian-Colombian company, as the country known for cocaine trafficking looks to marijuana to generate rural employment.

The government views its foray into the medicinal marijuana industry as a jobs creator in the countryside as President Juan Manuel Santos’s government nears a peace deal with Marxist rebels, including demobilized guerrillas from the FARC rebel group. 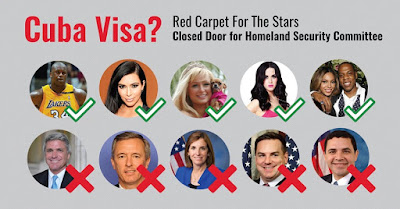 In case you haven’t been paying attention over the last few months (or been successfully distracted by Obama’s celebrity circus), here’s a timeline of events:

— Amid Obama’s political expansion of direct commercial flights to and from Cuba, Transportation Security Administration (TSA) officials privately express concerns to House Homeland Security lawmakers regarding the security and infrastructure of Cuba’s airports.

— The House Homeland Security Committee schedules a hearing to analyze these concerns, but is stonewalled by The White House. (See here for more.)

— Under threat of subpoena, one relevant TSA official publicly testifies to the House Homeland Committee, but won’t discuss specifics.

— A bipartisan delegation of House Homeland Security lawmakers are denied visas to Cuba to independently investigate these concerns.

Three years ago I pointed out that chronic shortages of consumer goods are a trademark of socialist and communist regimes. Now the police stations in Rio are relying on their neighbors to supply them with toilet paper.

The one I find most worrisome is the second one:

Officers said that in addition to pay problems, their work conditions — often in dangerous neighborhoods where they face heavily armed drug traffickers — have become dire.

“At the stations we don’t have paper or ink for the printers, there’s no one to come in to clean and some stations don’t have a water supply anymore so the toilets are not functioning,” said Andre, a 39-year-old officer in an elite unit that is key to providing security for the Olympics.

“Members of the public bring toilet paper to us,” he said.

A lack of fuel restricts use of cars, officers at the protest said.

Police also say that lack of a functioning helicopter added to their inability to prevent the daring rescue by traffickers a week ago of a notorious drug lord from a hospital, where he was under armed guard during treatment for bullet wounds.

In terms of security, the state only has funding “until the end of this week,” he was quoted as saying by O Globo.

The state is waiting for a promised federal bailout.

In the U.S., the country with the most goods going through the canal, the expansion is expected to lead to increased shipments to East Coast ports at the expense of West Coast ports.