Every week on Monday, the Council and our invited guests weigh in at the Watcher’s Forum, short takes on a major issue of the day, the culture, or daily living. This week’s question: Why Antisemitism?

Bookworm Room :The obvious answer, of course, is that in the West, the Jew is the perpetual outsider and in the Muslim world, the holy book instructs Muslims to be genocidal antisemites. Another obvious answer is that the medieval laws forcing Jews into being financiers (because they were barred from so many other professions but, unlike Christians, they were allowed to charge interest on money) meant that they became inextricably intertwined with the idea of capitalism.,  Leftists therefore hate them reflexively — never mind the actual facts on the ground, which is that for the majority of Jews throughout history have had little or nothing to do with capital and capitalism.

Honestly, though, I think the real answer is a more abstract one and it relates to the second and third core issues in the Bible. The first core issue in the Bible, of course, is God and each Jew’s relationship with God. While I suspect many are jealous of the Jews’ special relationship with God, I doubt that it drives too much antisemitism.
END_OF_DOCUMENT_TOKEN_TO_BE_REPLACED

Mary O’Grady has the details,
Kerry Urges Colombians to Cave to the FARC (emphasis added),

. . . the Obama administration is invested in the five years of negotiations—in Havana—between the government of Colombian President Juan Manuel Santos and the FARC. Mr. Santos has not secured one concession from the terrorists. The FARC says it will not accept even one day in jail, will not hand over its weapons to the government, will not relinquish its profits from kidnapping, drug-trafficking and extortion and will not compensate the millions of its victims. Mr. Santos, on the other hand, has broken multiple promises to the Colombian people, including a pledge not to grant the terrorists amnesty.

This is the top news this morning all over Latin America:

Fidel Castro to Obama: We don’t need your ‘presents’

Fidel Castro responded Monday to President Barack Obama’s historic trip to Cuba with a long, bristling letter recounting the history of U.S. aggression against Cuba, writing that “we don’t need the empire to give us any presents.”

The 1,500-word letter in state media titled “Brother Obama” was Castro’s first response to the president’s three-day visit last week, in which the American president said he had come to bury the two countries’ history of Cold War hostility. Obama did not meet with the 89-year-old Fidel Castro on the trip but met several times with his 84-year-old brother Raul Castro, the current Cuban president.

“Now go away or I shall taunt you a second time”

The weekend’s top story: Lots of dollars, and fifty years late, the Cuban communist regime finally allowed the now septuagenarians Stones to play in the island-prison, while still persecuting the local rockers. As expected, it was largely attended by foreigners who could cough up the admission price.

ARGENTINA
Can Mauricio Macri Save Argentina’s Economy? With Obama’s trip offering new access to international markets, Argentina’s new president will have to be tough to survive the bold reforms he seeks.

Macri’s macroeconomic challenges are vast, however, and success will depend on his administration’s ability to curb a 5.4 percent GDP budget deficit (the biggest since 1982), temper soaring inflation (current annual levels are about 36 percent), and stimulate economic growth. But necessary fiscal and monetary tightening could actually hurt economic improvement in the near term, risking the government’s ability to pay for the costs of implementing longer-term reforms. Already, Argentina’s economy is set to contract 1 percent this year.

Nobody promotes freedom abroad like Obama! ‘Decide what works’ between communism, socialism or capitalism and go with it Also at Gay Patriot.

OBAMA ON FREEDOM VS. TOTALITARIANISM — WHATEVER WORKS

Video of the whole speech (41:00 for capitalism vs, communism),

Barack Obama is to tango what Yogi Berra was to water polo.

BRAZIL
Brazil Economic Woes Deepen Amid Political Crisis. Country is heading for one of its worst recessions ever, yet its political straits draw all the attention

Brazil’s Rousseff slams ‘fascist’ attempts to oust her. Brazilian president says in newspaper interview her removal would be a coup

Chile’s Future: On the World Stage. What can Chile’s Santiago a Mil festival tell us about the country?

COLOMBIA
“Army searches for explosives buried by the FARC in the areas surrounding schools in Baraya, Huila. More information at 12:30PM”

ABC’s Muir Wonders to Obama: Does Castro ‘Have a Point’ Criticizing U.S. for No Universal Healthcare?

GUATEMALA
Guatemala’s CICIG: An Experiment in Motion Gets a Report Card. Two recent reports on Guatemala’s CICIG illustrate the international’s body’s potential to affect powerful shifts in the status quo, as well as its broad limitations.

MEXICO
How Mexico Awarded $30 Million to Juárez Cartel Operator. A former executive of the Bank of Mexico received government contracts worth over $30 million despite his conviction years earlier of being a financial operator for the Juárez Cartel.

Mexican ex-president posts video attacking Trump over planned wall“. Running a business does not mean having the leadership to run a nation,” Fox tells mogul. May I remind you, Under Mexican law, illegal immigration is a felony.

NICARAGUA
As Venezuela Falters, So Too Will Nicaragua

PANAMA
Panama: The Next Big Country for Latin American Films? An exponential surge in the quantity and quality of films has come out of Latin America over the past few years

The plan, being drafted as legislation by House Republicans, would not grant Puerto Rico’s most fervent request: permission to restructure its entire $72 billion debt in bankruptcy. It would, however, give the island certain crucial tools that bankruptcy proceedings can offer — but only if it first comes under close federal oversight and meets other conditions.

VENEZUELA
Inside Venezuela’s ‘top children’s medical unit’ where patients are dying. Quality health care for everyone in Venezuela was one of the great promises of the revolution but even in the best equipped paediatric unit, there’s a shortage of drugs and medical supplies

Lying about Margarita. Sumito Estévez wants to persuade you Margarita is a swell place to vacation in 2016. In doing so, he makes himself an accomplice to an outright swindle. 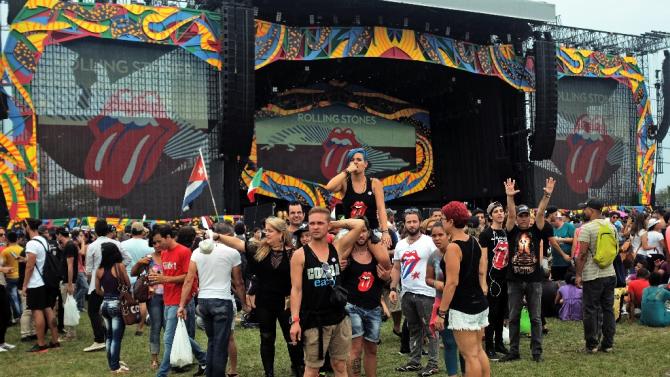 Speaking to young people in a country where most of the population believes anyone who is rich got there only for their government connections, Obama makes  a stand for all-out opportunism,

“So often in the past there has been a division between left and right, between capitalists and communists or socialists, and especially in the Americas, that’s been a big debate,” Obama said at the Buenos Aires town hall.

“Those are interesting intellectual arguments, but I think for your generation, you should be practical and just choose from what works. You don’t have to worry about whether it really fits into socialist theory or capitalist theory. You should just decide what works.”

While at it, he threw in Communist Cuba’s favorite talking points,

“To president Castro, I said you’ve made great progress in educating young people [Cuban dictators indoctrinate its youth]. Every child in Cuba gets a basic education. Medical care, the life expectancy of Cubans is equivalent to the United States despite it being a very poor country because they have access to health care. That’s a huge achievement,” he said about the repressive regime. “They should be congratulated. But you drive around Havana and you see the economy is not working. It looks like it did in the 1950s.”

Having finished his little speech, Obama took Air Force 1 & 2 for some sightseeing in Patagonia, 1,000 miles south of Buenos Aires, before returning to the USA, all at the capitalist taxpayers’ expense.

UPDATE
Linked to by Daily Gator. Thank you!