The Noisy Room : The nod for weasel this week goes to Lindsey ‘Dancing Queen’ Graham for joking that the GOP is batshit crazy and then at the #WPCFDinner: “If you kill Ted Cruz on the floor of the Senate, and the trial is at the Senate, no one will convict you.“ What a vile thing to say. The man should hang his head in shame and slink out of politics permanently for that snipe. Remember, Graham is the acolyte of John McCain who hates Ted Cruz with a passion.

Graham is now predicting Hillary Clinton will be president. Heck, he’s probably rooting for her as he never met a Progressive he didn’t adore.

Graham mocked the rest of the 2016 GOP field going through the remaining candidates. He cited “moderate” Ohio Gov. John Kasich’s recent comments about “women leaving their kitchens,” “nice guy” Dr. Ben Carson having “tried to kill his cousin” and Florida Sen. Marco Rubio changing his positions. “How did I lose to these guys?” Graham asked at one point. Oh, I don’t know… maybe because you are an effeminate incompetent boob?

With Donald Trump, however, Graham shifted to a more serious tone. “I don’t think he understands what makes America great. Our party and our country is going to have to up its game. You’re going to have to ask him harder questions,” Graham urged the reporters in the room. “And I don’t mean to turn a funny thing into a serious thing.” First off, Graham wouldn’t know what would make America great if he was trout smacked with it. And is it just me or does that sound suspiciously like he is grudgingly supporting Donald Trump? I don’t find it funny in the least.

For joking about the murder of a sitting senator and a good man, Lindsey Graham should get a Golden Weasel. In fact, he should be clubbed with it. 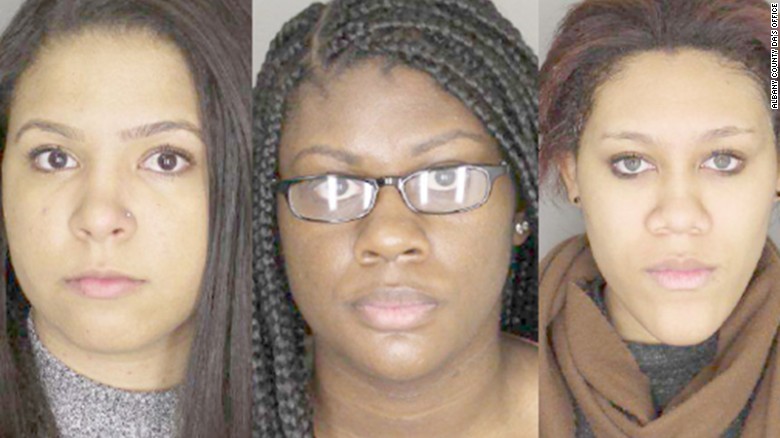 Nice Deb : I’d like to nominate the three African American women who perpetrated a major racial hate-crime hoax at SUNY Albany, to be this week’s Weasels.

On January 30, Ariel Agudio, Alexis Briggs, and Asha Burwell falsely claimed that they were harassed and assaulted by a mob of white people while riding on a CDTA bus back to campus from the bars in Albany.

Their story involved 10-20 white students spewing racial epithets and punching and kicking them while on the bus.

Without confirming whether the allegations were true, SUNY Albany President Robert Jones said he was “deeply concerned, saddened and angry about this incident.”Hundreds of students appeared at a rally that also included members of the National Congress of Black Women and the Albany chapter of Black Lives Matter.

After watching to surveillance videos from the 12 cameras on the bus, listening to their 911 call (especially when they were on hold and didn’t realize they were being recorded) and after talking to multiple witnesses, the police decided to charge the alleged victims with third-degree assault and with falsely reporting an incident.

It turns out that Agudio, Briggs, and Burwell were the ones throwing the punches and yelling racial slurs. The other kids were just trying to stop the assault.

It doesn’t get much weaselier than that.

JoshuaPundit : Ben Sasse is the Republican Senator from Nebraska, one of those people Majority Leader Mitch McConnell begged people to vote for to give the GOP a senate majority and stop President Barack Hussein Obama’s agenda. Of course, the senate majority happened but somehow, this president’s radical agenda kept right on rolling without so much as a speed bump to slow it down.

Today, Senator Sasse posted a little homily on his Facebook page stating that if Donald Trump were to win the Republican nomination, he would not vote for him or support him. Oh, he went into lots of details about how he considers himself a conservative, loves America’s freedom and democracy, isn’t supporting Hillary Clinton,yadda yadda. Let’s cut through this smoke screen and parse what’s actually going on here.

What the senator is saying when you cut to the chase is that if the primary voters are stupid enough (in his opinion) to  pick Donald Trump as their candidate, he isn’t going to respect their votes, will throw a tantrum and look for a third party candidate to vote for. Or to put it bluntly, in essence he’s actually throwing his support to Hillary Clinton.

Mitch McConnell is essentially saying the same thing. And there’s a whole movement out there coalescing under the cute little hashtag, #neverTrump. Remember when these same people were insisting that Trump make a ‘loyalty pledge’ that he would support the GOP nominee whomever it was and Trump agreed? These folks are guilty of hypocrisy on steroids. They ought to have at least the basic honesty to change their hashtag to #wildforHillary2016.

This is exactly the kind of contempt shown for the Republican base that led to Trump’s ascendancy in the first place.

I have my reservations about each of the candidates still running, but I agree with Hugh Hewitt that there isn’t one of them whom I wouldn’t support if they got the nomination, because none of them would be worse than putting a corrupt felon like Hillary Clinton in the White House, especially with three Supreme Court Justice appointments at stake. I love my country far more than that.

Obviously Senator Sasse and the #neverTrump crowd would rather see Mrs. Clinton get in if they don’t get their lollypop, and they’ll do their best to ensure she slithers into the Oval Office in two ways – first, by either not voting or supporting a futile last minute candidate if Donald Trump gets the nomination, and second, if he’s denied it by some trickery they concoct at the convention, ensuring that millions of alienated Trump supporters stay home. Not only that, but don’t expect them to line up and vote for any OGOPP (Official GOP Product) the party puts together in the future.

Senator Sasse is the worst kind of weasel…the kind that masks his weasel deeds as ‘principled’  and ‘noble.’ Some of the worst evil in the world is done done when masked by good intentions.