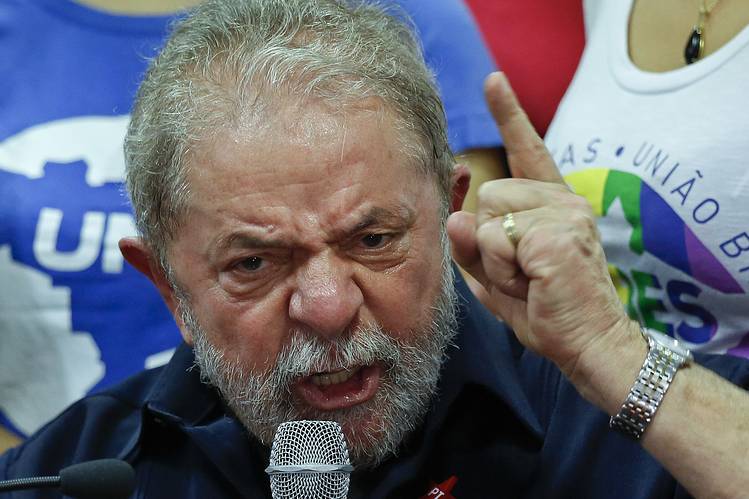 His house was raided, and he was detained:

In an operation that began at 6 a.m., officers from the Federal Police swarmed Mr. da Silva’s home in São Paulo. He was taken to a federal police station, but he was not arrested or charged. He was released after about three hours of questioning, which he later derided as a “media show.”

Authorities suspect that Mr. da Silva benefited from renovations made to a beachside penthouse and a sprawling country estate by two construction companies implicated in the investigation.

But the allegations go beyond claims that Mr. da Silva received personal perks and payoffs. Prosecutors on Friday described the former president as spearheading a yearslong scheme to divert money from Petrobras to fund election campaigns for his leftist Workers’ Party and its allies.

Go to the article for a full timeline of the investigation.

Is Dilma next? Contrary to the general rumors,

Prosecutors reiterated Friday that Ms. Rousseff isn’t under investigation in the Petrobras case. But the widening scandal has savaged her popularity and weakened her ability to govern as the investigation has ensnared key figures in the ruling Workers’ Party, including Mr. da Silva, her political mentor.

I’m actually surprised the investigators have gone as far as they have, detaining Lula.

UPDATE,
Spain’s El País bemoans that Lula’s detention is a huge blow to the country’s image (link in Spanish), because,

While these are very serious allegations, the prosecutors cannot question the fact that Lula is the politician who embodies Brazil’s definitive takeoff, the success of the fight against poverty, the integration of 30 million poor to the middle class, and economic growth unmatched in the country’s history.

El Pais’s editorial board can’t get itself to ask why and at what price must politicians be paid off, and do the temporary gains (now being lost) under Lula justify his corrupt deals. Hence, they are displeased with the investigation?