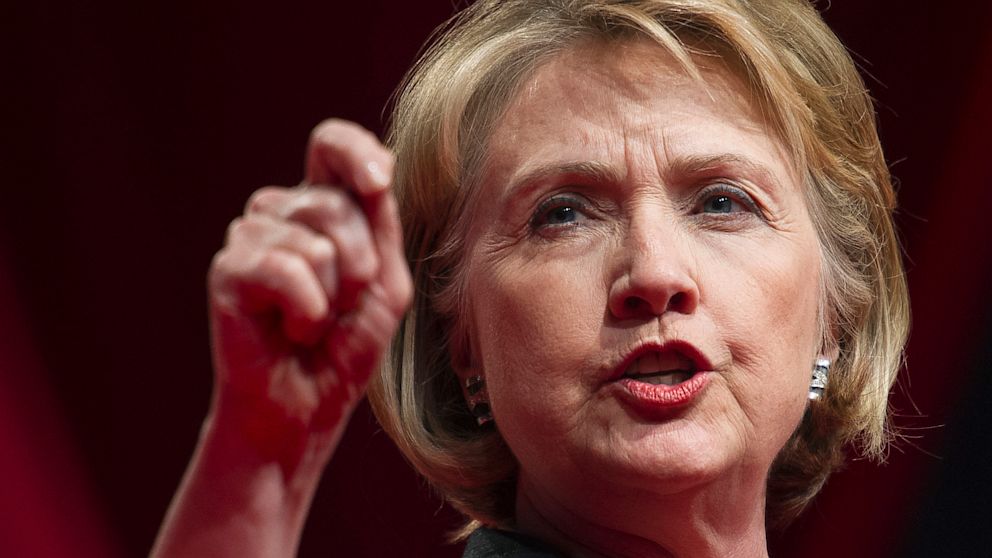 The Noisy Room : My nomination this week goes to the Hildabeast. At a rally (this time with more than two people), Hillary Clinton was taking questions in New Hampshire. A Republican State Representative who was a rape survivor started asking Clinton about Bill Clinton raping Juanita Broderrick in the late 1970’s and getting away with it. Unsurprisingly, Clinton would not take the question and moved on. The woman sat down. But the Hildabeast was not done with her. She turned on the woman and in a vicious tone, she lashed out saying, “You are very rude, and I am not going to ever call on you.” Touchy and thin skinned.

The rally applauded when Clinton bit at the woman asking the question. Nice minions you got there. Gee, Hillary will coddle communists, racists, radicals and especially Islamists, but ask a pointed question about her husband’s ‘indulgences’ and she comes unglued. Imagine what she would do during war. It’s not rude to want the facts and Bill Clinton walked away free and clear after assaulting I don’t know how many women. Incidents that Hillary actively covered up and destroyed people’s lives over. Not out of concern for Billy-boy, but out of calculating manipulations concerning her political future and her lust for power. You also won’t find this clip much of anywhere but here as the media is doing their darndest to cover up Hillary’s outburst. It makes her look like the shrew she is and very un-presidential. That weasel will look really nice in her cell.

Puma By Design : My choice for Weasel of the Week is Hillary Clinton who this weekend at a NH Town Hall lashed out at a rape survivor seeking to question Hillary about that lech, she’s married to, Bill Clinton.

Clinton, showing her true hand was rude, condescending and the perfect representative of Progressives and their war on women.

Ah, dear Mrs. Clinton. Now, ordinarily my view would be that you can’t blame someone for the bad and immoral actions of their spouse. That is,unless that someone had an active role  in covering up and enabling said spouse’s activities and was attempting to besmirch the reputations of others for allegedly doing the same things they helped their spouse get away with. To wit, Mrs. Clinton in a nutshell.

Of course, that aside, there are a lot of other reasons to expect Mrs. Clinton to be occupying a cell at a posh, white collar prison like Allentown rather than the Oval Office, and even today rumors sparked by an unnamed FORMER federal prosecutor about an upcoming indictment are dancing around the internet like butterflies.

Don’t believe a word of it.

As I’ve pointed out before, the people at the FBI and the Justice Department in charge of such things nowall work for a man named Barack Hussein Obama, and they’ll follow his orders and do what they’re told. There is no independent prosecutor’s office any more. Mr. Bill saw to that just before he left office in 2001. It’s all under the Justice Department and the president’s hand picked attorney general Loretta Lynch now.

And while congress could hire an independent prosecutor and allocate funds for an investigation, we all know they won’t.

So barring an investigation by a future administration, Hill and Bill will likely end up living quite well on the money they ‘earned’ by selling their offices and squirreling it away in their bogus foundation. Crime, unfortunately, does pay from time to time, at least on this mortal coil. And that kind of soulless weaselness is exactly what this award, the Statuette of Shame commemorates since the real reward for this kind of behavior comes from a very different place…see Psalm 92 among other places for details.

A decent society would have voted the Clintons off the Island a long time ago. It remains to be seen if they will at least deny her the throne she’s schemed so relentlessly to steal.