Barabas men’s shirts can barely keep up with the demand, says CNN, and orders are coming in from all over the world.

At first glance it may appear that we have gone from this, 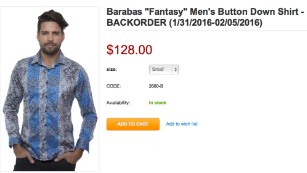 The “Fantasy” shirt, whose style was worn by El Chapo.

But despair not. Back in his day. Al Capone, another world-famous criminal, was a gentleman of style.

In other Chapo news,
Definitely Real Texts Show What El Chapo Thinks of Sean Penn. Two words: not much. Instead, El Chapo had a crush on Kate del Castillo, star of La Reina del Sur.

Even when we have already established that the whole thing was a movie deal under the guise of an interview:
Spanish and Argentinean producers also met ‘El Chapo,’ says Mexico. Official sources believe filmmakers went with Sean Penn to meet notorious drug lord. Apparently Sean Penn forgot to mention,

Spaniard José Ibáñez-Martín Pira and Argentinean Fernando Sulichin traveled to El Chapo’s hideout in the mountains of Durango state with the two stars to discuss the possibility of filming the drug lord’s story.

By now, the story is El Chapo, Episode III: The Farce Awakens

How can we describe this most recent episode in the saga of El Chapo? If history repeats itself as farce, what comes next? Perhaps the right word is gringada, a derogatory Mexican term applied to Hollywood movies that seem typically formulaic, sentimental, nationalistic and patriotic, usually idiotic, cynical and annoying in one way or another.

This, at least is how people on the Mexican side of the border have witnessed the third capture of the Sinaloa cartel capo Joaquín Guzmán Loera—known as El Chapo—the region’s most-wanted man, who previously escaped from Mexico’s reputedly most secure prison, six months ago, through a mile-long tunnel connected to the shower in his cell, and escaped from another prison, in 2001, in a way that is still not entirely clear. (Perhaps in a laundry cart?) This episode was, in fact, already something of a gringada even before the general ticket-buying public found out, in Rolling Stone, about Sean Penn’s visit, in October, with the Mexican telenovela actress Kate del Castillo, to El Chapo in his secret mountain hideaway. Already we had seen President Enrique Peña Nieto, with his in-the-sewer approval ratings, his government largely discredited by corruption scandals, economic crisis, and its inability to combat the corruption and impunity of Mexico’s political, military, and judicial establishments, celebrating the capture of his government’s public enemy No. 1 and tweeting “Mission Accomplished!” Photographs show the celebrating President beaming happily, like a little boy on Christmas morning. But, as in any good gringada, a victory that comes so early in the story can’t last. Mexicans and much of the international media pounced, criticizing and sometimes openly mocking the triumphalist rhetoric. For one thing, all this capture did was remind many of how El Chapo had humiliated the government by escaping the last time, and, of course, everyone knows that nothing in Mexico changed for the better—there was no significant reduction in violence, drug trafficking, or crime, there were no advances in fighting corruption —during the year the capo spent in prison.

El Chapo had quite a number of visitors during his hiding; Spain’s ABC reports that Mexican congresswoman Lucero Guadalupe López dropped by to celebrate New Year’s Eve. López is a member of the PAN and is rumored to have had an affair with El Chapo.

Jaime Bayly’s been getting a lot of mileage from the Chapo caper, including El Chapo’s erectile dysfunction surgery on the run. It seems that all that stress caught up with the father of ten (official) children.

The book’s title matches nicely with the Colombian soap opera, Pablo Escobar, Patrón del Mal, which, after all, is what El Chapo is after.