UPDATE: It was a movie deal disguised as an interview.

Mexican authorities couldn’t find El Chapo, but Rolling Stone Mag could, and sent Sean Penn to interview him in his jungle hideout,
and interview Sean did,
for seven hours,
in the jungle.

I kid you not:

The seven hours Mr. Guzmán spent with Mr. Penn, and the follow-up interviews by phone and video, which began in October while he was on the run from the Mexican and American authorities, marked another surreal turn in his long-running battle to evade Mexican and American authorities. Mr. Guzmán, one of the world’s most wanted fugitives, who had twice escaped jail, was captured in his home state of Sinaloa in northwest Mexico on Friday after a gun battle with the authorities.

It also marks a stark admission that he has operated a drug empire. Interviewed by a group of reporters in 1993 after a previous arrest, Mr. Guzmán denied that he engaged in drug dealing. “I’m a farmer,” he said, listing his produce as corn and beans. He denied that he used weapons or had a significant funds.

They even had a photo-op, 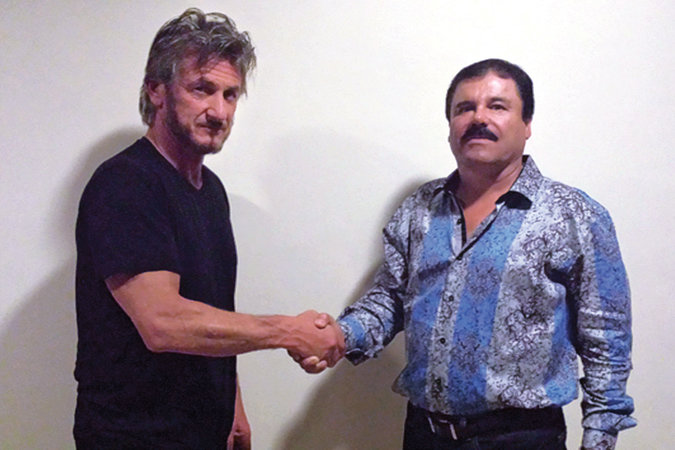 And then try to understand why I find most fiction dull at this point.

El Chapo had approval power on the final version of the Rolling Stone piece. https://t.co/WW0tZz5eD1

Hey, you can bet your PowerBall ticket there’s a film script in the works.

Oh my God… @Sethrogen & @JamesFrancoTV are behind this, aren't they?! This is THE INTERVIEW 2 isn't it?!! https://t.co/CAWEewW4zv