As you may recall, I posted on December 8th,

As far as the military (which allegedly may be involved in the drug trade), Miami’s El Nuevo Herald reports that Defense Minister Vladimir Padrino López refused to go along with Nicolas Maduro’s and Diosdado Cabello’s orders to disregard the opposition’s massive victory, since that would lend itself to a prolonged period of violence.

“According to unconfirmed reports, the military’s high command let it be known during the tense Sunday evening that it would not support any results showing anything but the actual votes. That was the first sign that the military was unwilling to stand by the chavista government no matter what.”

Seeing a 75% turnout, it’s not unreasonable to assume that the military were aware that a lot of chavistas – and many among the military – had voted for the opposition.

Itxu Díaz has an article in The Daily Beast, How Venezuela’s Military Saved Democracy (For Its Own Reasons). Venezuela was on the brink of civil war, and that was the last thing the army wanted. But it still wants to be the arbiter of power.

The opposition claimed Maduro loyalists were trying to steal the election with last-minute ballots and using false identification papers.

In anticipation of such illegal maneuvers, military officers aligned with the opposition implemented a secret plan known as “Operation 7K,” Montaner reported. It was lead by retired Gen. Ovidio Poggioli, who recruited 7,000 voters as observers. They pulled together election data table by table and sent the results in real time to the opposition, avoiding possible fraud in the count.

I am more cynical than Díaz, and would not say that the military “saved democracy”. It brought forth the election results in real time, yes, but democracy had little to do with their reasons, since having a country lapse into a semi-civil war would interfere with the military’s real and more profitable businesses (which, as mentioned above, allegedly may include the drug trade).

it looks as if Maduro’s power is coming to an end.

Maybe, maybe not. The chavistas in power are not just sitting there: 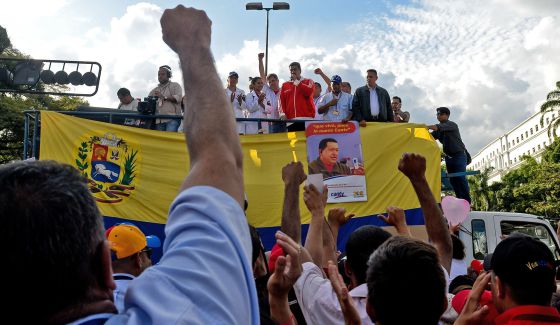 In my December 8th post I also linked to Oppenheimer’s prediction, Beware of post-election coup in Venezuela. Well, Alfredo Meza reports that now ‘Chavismo’ seeks ways to stay in power following heavy election defeat. Venezuela’s assembly speaker swears in a parallel parliament before opposition takes over. You read it right,

Venezuela’s ruling “Chavista” coalition has responded to the setback suffered in the December 6 parliamentary elections, when it lost its long-standing majority to the opposition Democratic Unity Roundtable (MUD), by installing a parallel “communal parliament” that aims to exercise the same powers of the National Assembly under the Constitution.

Additionally, and rather ironically, the PSUV wants investigations of “irregularities” in precincts where the opposition won.

Daniel Duquenal splits hairs and posts that Chavismo these days illustrates very well the difference between fascism and communism, but as Hayek posited,

the collectivist idea of empowering government with increasing economic control would lead not to a utopia but to the horrors of Nazi Germany and Fascist Italy.

It also led to the Soviet gulags.

Democracy is far from safe at all times, but certainly is not safe in Venezuela.