Long overdue,
Argentina Announces Lifting of Currency Controls. Argentina’s new government moved to allow its citizens to buy dollars freely for the first time in four years, setting the stage for a sharp depreciation of the peso and, the government hopes, a boost to the faltering economy.

In the short term, the move is likely to spark the biggest currency depreciation since Argentina’s messy economic meltdown in 2002. Economists expect the peso to fall from its current official price of 9.8 to the dollar to the black-market rate of between 14 and 15 per dollar, losing a third of its value.

Underscoring the risks, the step came on the same day the U.S. Federal Reserve raised its benchmark short-term interest rate for the first time in eight years, making it relatively harder for other countries, including Argentina, to attract investment.

A weaker peso will make imports more expensive and add to the country’s already high inflation rate of 25%. To keep the lid on price hikes and attract investment, Argentina’s central bank on Tuesday raised its benchmark rate as high as 38%.

Argentina has precious little money with which to defend its currency in an open market: In the past four years, the central bank’s listed foreign currency reserves have plummeted from more than $52 billion to around $24 billion. Economists say the bank’s real net reserves are far lower considering liabilities like money owed to importers and outstanding bond payments.

This move shows that Macri is getting serious about the economy. James Roberts proposes Nine Steps President Macri Can Take to Restore Economic Freedom in Argentina. In his article, Roberts describes the effects of

In an attempt to prop up the peso and prevent additional foreign currency from leaving the country, Kirchner imposed a series of controls on foreign currency transactions, enacting more than 30 regulations since 2011. These included: curtailing most foreign currency purchases; taxing Argentines on the estimated value of their foreign vacations and on Internet purchases; preventing foreign companies operating in Argentina from paying out dividends; and restricting imports[16](which has meant higher input costs for import-dependent local companies). By 2013, facing a deteriorating balance of payments, the government imposed truly draconian bans on foreign-currency transactions to protect dwindling dollar reserves.

Despite these measures, capital flight has accelerated. A recent and telling example has been the purchase of U.S. real estate by Argentines to circumvent capital controls. A real estate developer in Florida, for example, recently reported that almost 50 percent of all new condominiums built in Miami are sold to Argentines.[17] 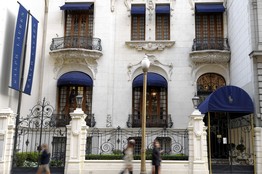 Back in 2013 I posted about The high cost of not doing business in Argentina, when Ralph Lauren Corp., after closing its Buenos Aires shop in 2012 over economic

and currency issues (at a cost of US$3million in severance pay and lease expenses), self-reported to the US DOJ and the SEC, and agreed to pay a $882,000 penalty as part of a non-prosecution agreement with the U.S. Department of Justice and $734,846 to the Securities and Exchange Commission. RLC preferred to do this than continue to do business in the country, since, for practical purposes foreign companies were forced to do all their transactions in pesos.

Now RLC and several other brands are considering reopening stores in the country. The main obstacles are high import duties, currency exchange, and corruption.

For now, the end of currency controls is a positive step towards a better business environment.