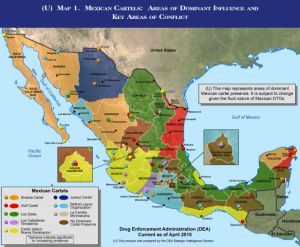 Revolutionary Armed Forces of Colombia (FARC) guerrillas have been working alongside Mexican drug cartels to transport high quantities of cocaine into the United States, according to a US Drug Enforcement Administration (DEA) report.

Mexico’s powerful narcotics-smuggling organizations have taken advantage of their proximity to the United States to do business with the FARC, which supply them with cocaine processed in the jungles of Colombia.

“Investigative reporting indicates a working relationship between multiple FARC fronts and Mexican [cartels], including Beltrán Leyva, Jalisco Nueva Generación and the Sinaloa cartel to transport cocaine into the United States.”