Among the investigated: Venezuela’s ambassador to Washington and former president of Petróleos de Venezuela. 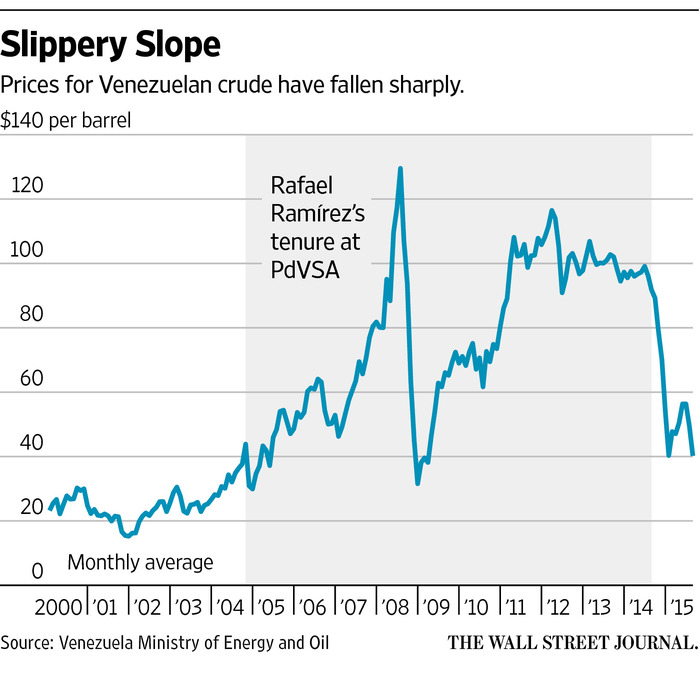 Now, U.S. authorities have launched a series of wide-ranging investigations into whether Venezuela’s leaders used PdVSA to loot billions of dollars from the country through kickbacks and other schemes, say people familiar with the matter. The probes, carried out by federal law enforcement in multiple jurisdictions around the U.S., are also attempting to determine whether PdVSA and its foreign bank accounts were used for other illegal purposes, including black-market currency schemes and laundering drug money, these people say.
. . .
No charges have been made public in the PdVSA matter and it is possible none will be filed. Earlier this month federal prosecutors from New York, Washington, Missouri and Texas met in person or by teleconference in Washington to coordinate actions and share evidence and witnesses in the various PdVSA-related probes, say three people familiar with the matter. The meeting also included agents from the Department of Homeland Security, the Drug Enforcement Administration, the Federal Bureau of Investigation and other agencies, these people say.

As for the ambassador (emphasis added),

Under Mr. Ramírez, the soft-spoken son of a Marxist guerrilla, PdVSA completed a transformation from one of the world’s most-efficient oil companies to an arm of the late President Hugo Chávez’s socialist revolution. Petrodollars went to pay for housing, appliances and food for the poor, efforts that won voters at election time but starved the oil industry of funds needed for investment and maintenance. The company’s aircraft have been used to transport the families of ministers and allies, from Bolivia’s president to Colombian guerrilla commanders.

As Capt. Louis would say, I am shocked, shocked, that anyone would allege that the son of a Marxist guerrilla would do so, while lining his pockets and sipping “the best Château Pétrus wines”,

Venezuela rejected the Brazilian official named to lead the group.
. . .
Venezuela’s lack of response “did not allow the mission to accompany the auditing of the electronic voting system, nor start assessing the fairness of the electoral contest, which, less than two months from the election, prevents a fair observation,” Brazil’s independent electoral board said, explaining its decision to withdraw from the process.

Having set the election for December 6, a big day for Chavismo, I am shocked, shocked! that Maduro was unhappy with Nelson Jobim, former head of Brazil’s Superior Electoral Tribunal and former Supreme Court justice (not to be confused with the much more famous Jobim), asking to accompany the election auditing.

Mr. Maduro said during an Oct. 1 televised address that he wanted Jimmy Carter to serve as an election observer, five months after the former U.S. president’s pro-democracy organization, the Carter Center, closed its election observation office in Caracas after 13 years in the country.

You really can’t make up this stuff if you try.