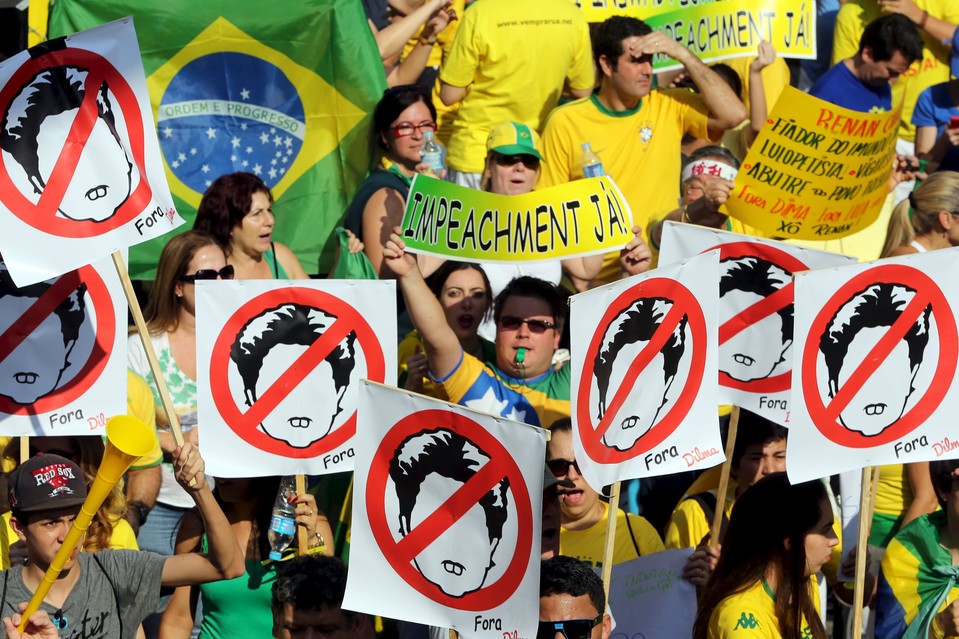 Wrapping themselves in the national flag, Brazilians swarm city centers

According to Brazilian media and on social networks, protests were staged in all of Brazil’s 26 states, as well as in the capital district of Brasília.

In the city of São Paulo, the antigovernment protest was the second-largest since March, with estimates ranging from 135,000 to 350,000 protesters on Avenida Paulista on Sunday afternoon.
. . .
Yet, over the past two weeks, some of Ms. Rousseff’s severest critics have been making conciliatory remarks, suggesting that Brasília’s ruling elites are looking for ways to defuse the crisis without a regime change. Moody’s Investors Service recently reduced Brazil’s credit rating to one notch above junk status, lending urgency to some politicians’ desire to end the standoff quickly.

O Globo has a photo gallery, complete with blow-up doll of Lula in stripes.

I could find no information on the line of succession in case of presidential impeachment in Brazil. Does it mean there will be an immediate election? Considering the rumors around when Dilma was re-elected, what measures would guarantee a clean vote?

In US news,
Trump’s Defective EconomicsThe candidate is promoting currency devaluation—he should ask Argentina and Brazil how that worked out.

If “competitive devaluation” worked, Argentina would be the national equivalent of Donald Trump. That means very, very rich, in case you somehow missed the Donald’s constant assertion about his net worth.

Brazil has a similar history. It began to cultivate middle-income earners only after it pegged its currency to the dollar in 1994 to halt hyperinflation. Brazil abandoned the peg in 1999 but that didn’t make the Brazilian economy more globally competitive. Quite the opposite occurred, because devaluation acts as a form of protectionism. When the Brazilian real weakens, Brazilians lose purchasing power and can no longer afford high-tariff imports. They’re forced to buy lower-quality goods from inefficient Brazilian industries.