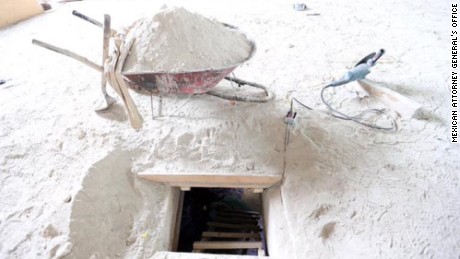 This took a lot of know-how, effort, labor and co-ordination (emphasis added):

The tunnel that Guzman used to flee was sophisticated. It was nearly a mile long and deep enough for him to stand, authorities said. Its opening was a rectangular hole in the former prisoner’s shower, measuring 20 inches by 20 inches. It then descended 30 feet, ran its length under largely unpopulated land and ended in a somewhat isolated house under construction in the nondescript Santa Juanita neighborhood, surrounded by empty fields.

Authorities, attempting to explain how it was possible for such an elaborate construction to have taken place unnoticed, said Guzman’s shower was the only place in his cell where there were no security cameras.

So, to review, El Chapo