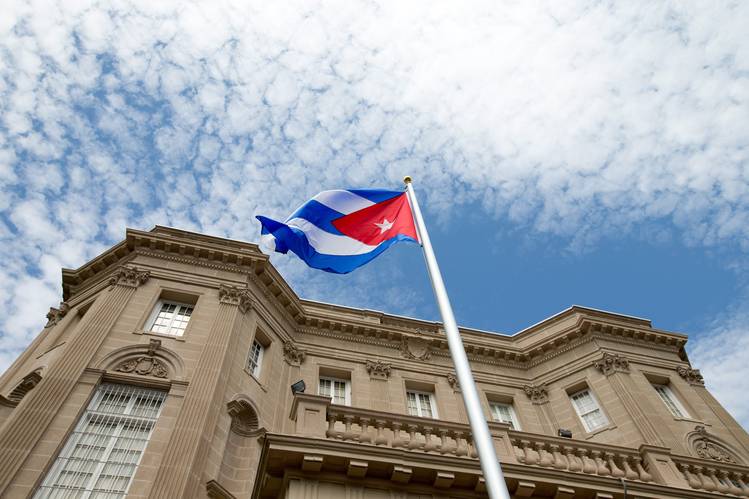 After 54 years, Cuba reopens embassy in Washington on Monday

Over at State, it’s between Croatia and Cyprus.

But As Embassies Open, a Further Thaw in Cuban-U. S. ties Faces Hurdles in CongressObama administration has made little progress in swaying lawmakers to lift embargo

The new regulations took effect in January, but Congress will have to act to fully lift the trade and travel embargoes. Most U.S. companies are currently prohibited from doing business in Cuba and traveling there from the U.S. as a tourist remains illegal.

White House press secretary Josh Earnest said Friday that the Obama administration hadn’t made progress in encouraging Congress to lift the embargo but that Mr. Obama could still take steps on his own that couldn’t be blocked by opponents in Congress.

Capitol Hill Cubans has a Statement on the Opening of U.S. and Cuban Embassies

Finally, it serves as a reminder of the coercive tactics that culminated in this process. As Gerardo Hernandez, the Cuban spy who was sentenced to life in prison by a U.S. federal court for the murder conspiracy of Americans, and thereafter commuted by President Obama as part of his deal for the release of an American hostage held by Raul Castro, boasted this weekend:

“We are going to have diplomatic relations with the United States without having ceded one iota.”

Re-establishing of U.S.-Cuba diplomatic ties has been no good for the Cuban people. Marc Masferrer has the specifics.

Bottom line? Nothing New under the Cuban SunEmbassies Paint Over Old, Tired Communism