There is a larger concern, that Venezuela has become the epicenter for several national security threats in the region. In terms of threat analysis, the defense and intelligence communities often focus on three areas running parallel throughout the world: (1) transnational organized crime, (2) terrorism, and (3) WMD proliferation.+

The first two we know are being propagated in Venezuela. Each month more evidence surfaces on how PDVSA is sponsoring, the Bolivarian Armed Forces are brokering, and several high-ranking Venezuelan officials are implicated in transnational organized crime. Moreover, research at the Center for a Secure Free Society (SFS) uncovered a crime-terror pipeline being managed by Venezuela that sends drugs and funds to the Middle East and brings back foreign fighters or Islamic terrorists to the Western Hemisphere.+

But of even greater concern is the increasing evidence regarding Venezuela’s role in aiding and abetting WMD proliferation for rogue regimes, namely the Islamic Republic of Iran.

“a social tool focused on strengthening the revolution’s progress in the battle of ideas and promoting the well-being of the Bolivarian people, under the leadership of [Venezuelan president] Nicolás Maduro Moros and the political, ideological and liberation thought of Bolívar and Chávez”.”

Their #1 item lists Hugo Chávez, Néstor Kirchner, Cristina Fernández de Kirchner and Nicolás Maduro, as creators of a big homeland, i.e., a unification of South America under their leadership, of course.

Never mind that two of them already passed.

The #5 item asserts Argentina’s claim not only to the Falkland Islands, but also to the South Georgia and South Sandwich Islands.

If all of this doesn’t sound insane enough for you, here’s the RAR banner, featuring a silhouette of the very dead Hugo: 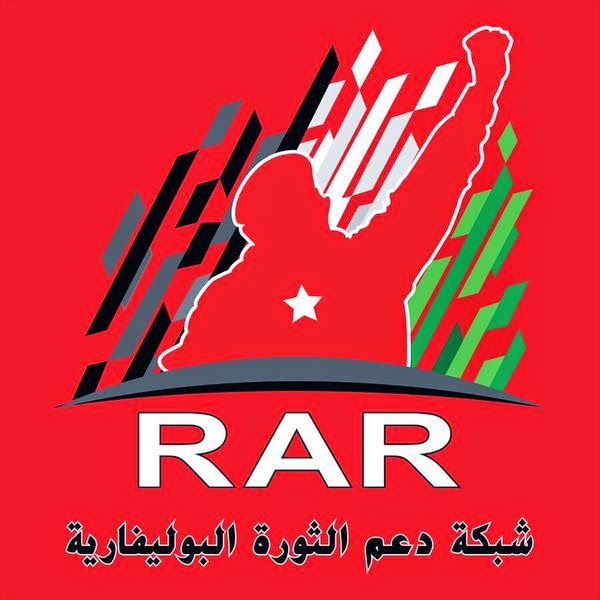 The bottom line in Arabic, I have been told means, “strong forces join the Bolivarian Revolution.”

Makes you wonder who bankrolled the banner, and the shindig.

n Gaza and Ramallah in the Palestinian Territories I am told that next to Arafat’s and Che Guevara’s posters, a new poster of Chavez is being added.