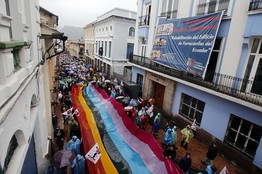 Thousands of people took to the streets in Quito and at least 12 other cities in Ecuador Thursday to protest against the government of President Rafael Correa, asking for changes in economic, labor and social policies.
. . .
Protest leaders said they are protesting against planned labor and land reforms, to reject large-scale mining and new oil tenders, and against planned constitutional reforms that will open up the possibility for indefinite re-election for elected posts. Leaders also said they are against new tariffs for 38% of the imported products. Economists said the tariff increase would cause a general increase in prices, affecting mainly the middle class.

Protesters marched about two kilometers in central Quito, carrying signs that read, “We want democracy” and “No more tax and tariff increases” as well as “Say no to re-election.”

As you may recall, last year Rafael Correa was pondering whether to continue as president after 2017, even when the constitution prevents it.

Last year he also came up with a fake currency to cover up a fiscal deficit, including debt service, of some $9.2 billion. This year he asked China for help.