Before dawn, a group of taxi drivers used baseball bats to smash the windows and doors of an automobile that was transporting an Uber user in the city’s central Roma district.

The thugs are organized

The attackers are members of the Permanent Committee for Transportation in the Federal District, an organization made up of taxi drivers who came together last October to organize protest rallies against the online application, which is used to put passengers in touch with private drivers.

Here’s a link to the Uber app.

Máximo Kirchner held bank accounts abroad with Nilda Garré, says financial sector investigator
The son of Argentina´s president, Cristina Kirchner, is said to have been a joint accountholder in million-dollar bank accounts in the United States and Cayman islands with Argentina´s former ambassador to Venezuela

On Sunday, March 29, the Argentinean newspaper Clarín published an article in which it claimed that Nilda Garré had held bank accounts in the United States and Iran. One of the accounts mentioned by the newspaper was with Felton Bank, headquartered in the American state of Delaware, and amounted to US$ 61.5 million between 2005 and 2010.

The Iranian bank account was said to have been opened on April 28, 2011. This occurred only three months after a secret meeting held in the Syrian city of Aleppo in which the foreign ministers of Iran and Argentina negotiated the creation of a truth commission that would serve to cover up Iranian participation in the 1994 attacks against the Jewish association Amia in Buenos Aires, according to the Argentinean prosecutor Alberto Nisman who was murdered in January of this year.

Nilda Garré has been an influential figure within the Argentinean government since the first days of the presidency of the late Néstor Kirchner. She was Argentinean ambassador to Venezuela, Defense minister, Security minister and is currently ambassador to the Organization of American States (OAS). She denied to Clarín that she had maintained bank accounts in the United States and Iran.

Garré, who was Argentina´s Defense minister when the Iranian government had asked Chavez to persuade Argentina to share nuclear secrets in exchange for money, “was in charge of handling this matter with her counterparts in Iran and Venezuela.” 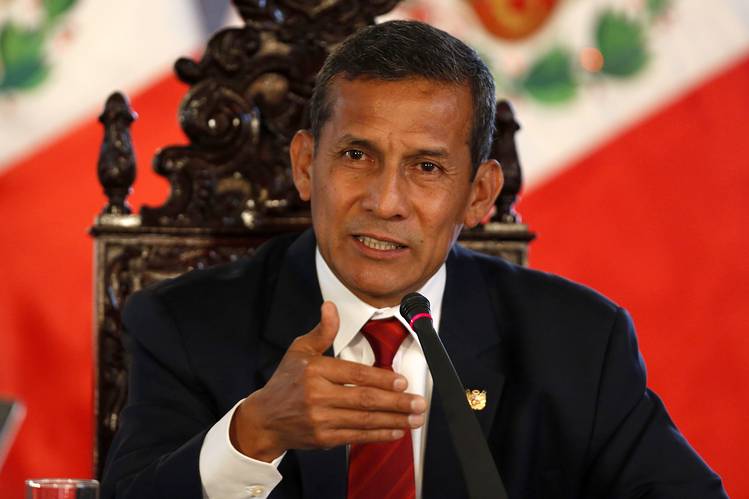 Prosecutor Viviana Fein is conducting the investigation into the death of Alberto Nisman “with an evident interest” of only showing that the AMIA special prosecutor committed “suicide.”

ARGENTINA
Falklands defence: Why is Argentina considering an aircraft deal with the Russians?
Russia’s potential deal to lease 12 long-range bombers to Argentina is causing Britain to rethink its protection of the Falklands. Why is Cristina Kirchner cosying up to Moscow?

BRAZIL
Brazil Economy to Shrink, Joblessness Rises
The Brazilian central bank’s view of the economy is getting worse, with the official unemployment rate rising in February, as Latin America’s largest economy continues to struggle.

As it enters the final stretch of a massive expansion, the Panama Canal Authority is setting its sights on an even more ambitious project worth up to $17 billion that would allow it to handle the world’s biggest ships.

Workers are now installing giant, 22-story lock gates to accommodate larger “Post-Panamax” ships through the Canal, one of the world’s busiest maritime routes.

The project involves building a third set of locks on the Canal. It is being headed by Italy’s Salini Impregilo and Spain’s Sacyr, and should open on April 1, 2016.

URUGUAY
Uruguay will no longer grant asylum to Guantanamo prisoners

The new Uruguayan government says it will no longer grant asylum to prisoners from the Guantanamo Bay detention centre.

In December, Uruguay gave sanctuary to six Arab men who had been held at the US base in Cuba for 12 years.

VENEZUELA
“Normalization” update: Venezuelan Castro puppet seeks to humiliate U.S. at the Summit of the Americas but Maduro Says “Venezuela Is Ready” for Dialogue with U.S. Of course. In his spare time, he indulged in vandalism,

How a German trial relates to the #Nisman case

Barrio 18 in El Salvador: A View from the Inside

The #Nisman Case and the Whitewashing of Iran

About that “Cuban side or the white side”

Ted throws his hat in the ring

The body of a key FARC commander has been found in a grave in south-central Colombia, the Colombian army claimed on Wednesday.

The commander of the guerrillas’ 66th front, “Pedro Nel,” was found in an improvised grave in the Planadas municipality in the Tolima state.

According to the military, the deceased guerrilla commander was severely injured in combat with a military unit in the nearby Neiva department on March 12 when his unit was collecting extortion payments.

However, Pedro Nel was able to escape and fled to Tolima where he died hours after the clash with the military, according to the National Army’s 9th Division.

Army commander General Jaime Asprilla told press that the death of “Pedro Nel” “seriously affects the Central Joint Command [block] of the FARC” that is active in the Tolima and Huila states.

The ringleader’s death is the second important combat kill reported by the army this month.

Better dead than in congress.

You may recall that a few years ago I recommended this book:
Jon B. Perdue, director of the Latin American program at the Fund for American Studies, has written THE must-read book about our hemisphere, The War of All the People: The Nexus of Latin American Radicalism and Middle Eastern Terrorism.

The title refers to Hugo Chavez’s name for his war on U.S. “imperialism”, an ideological and political, violent war involving Iran, terrorist organizations from around the world, and drug money.

Now we have the Obama administration cozying up to Cuba and Iran (Ace has much more on the awful Iran deal), after having declared “the Monroe Doctrine is over.”

Jaime Suchlicki writes on Cuba’s love for the ayatollahs (h/t Babalu):From Havana to Tehran
The strange love affair between a theocracy and an atheistic dictatorship.

Communist Cuba’s alliance with the Iran of the Ayatollahs dates to 1979, when Fidel Castro became one of the first heads of state to recognize the Islamic Republic’s radical clerics. Addressing then-Supreme Leader Ayatollah Khomeini, Castro insisted that there was “no contradiction between revolution and religion,” an ecumenical principle that has guided Cuba’s relations with Iran and other Islamic regimes. Over the next two decades, Castro fostered a unique relationship between secular communist Cuba and theocratic Iran, united by a common hatred of the United States and the liberal, democratic West — and by substantial material interests. (In the photo, Iran’s Vice President Mohammad Reza Rahimi and Cuba’s Vice Foreign Minister Marcos Rodriguez attend a wreath-laying ceremony on Revolution Square in Havana on Sept. 7, 2011.)

So there you have it: a word that is OK to use when referring to the Clintons.

Read my article to find out which word.

Roya Hakakian explains Germany’s commitment to justice:
Iran’s Assassins in Berlin
The determination of the prosecutor, the press, and the Iranian exile community made all the difference in Germany, where the courts ruled against Iran’s highest leaders.

[Investigator Bruno] Jost had a major advantage. He was investigating in the shadow of the World War II blunders and the fundamental transformations that the German justice system had undergone. By the time the trial was set to begin, Tehran was no longer the focus of popular attention. Now, it was Germany, herself, on trial, with something grand to prove about her own credibility and the authenticity of her reformation.

Whether the same spirit can cross over into another continent to move the course of the Argentines’ investigation is to be seen. But this much is for sure: The sum of the 1994 AMIA bombing, Iran’s lethal role, the misconduct of former President Carlos Menem, an alleged conspiracy to halt the nuclear negotiations, the mysterious murder of Alberto Nisman, and the alleged corruption of President Cristina Kirchner or the Argentine Intelligence all add up to something larger. It is about Argentina herself, the state of her republic, and whether the ghosts of its dirty past are truly buried or still lurking in the shadows.

This us a must-read.