Taking a cue from the U.S.-Cuba sweet deal (sweet for Cuba, that is), Venezuelan dictator Nicolás Maduro wants to make a deal:
Venezuela’s Maduro would free Lopez if U.S. freed Puerto Rican

Venezuelan President Nicolas Maduro said on Sunday he would only seek the release of jailed opposition leader Leopoldo Lopez if the United States agreed to release a Puerto Rican nationalist currently held in a U.S. prison.

The man in question, Oscar Lopez Rivera, is serving

he is a dangerous terrorist as well as a sociopath, and has never been known to express any regret or remorse. He was a co-founder of a deadly terrorist group, who constructed bombs (their weapon of choice) and trained others in both how to build them and how to use them. He twice attempted to escape from prison, and the latter attempt included plans of violence and murder.

Lopez-Rivera was offered clemency by Bill Clinton in August of 1999 (in a move that was engineered by then Deputy Attorney General Eric Holder) but refused to show remorse.

So, not only is Maduro meddling into Puerto Rican politics again – where he clearly is not wanted, he’s offering to exchange Leopoldo Lopez, an innocent man, for a sociopath terrorist:

“The only way I would use (presidential) powers would be to put (Leopoldo Lopez) on a plane, so he can go to the United States and stay there, and they would give me Oscar Lopez Rivera – man for man,” Maduro said during a televised broadcast.

After his offer, Maduro headed overseas – in a Cuban jet – in search of money, since at home the shelves are empty and oil hit $50/barrel as of the writing of this post.

He bundled up for the occasion: 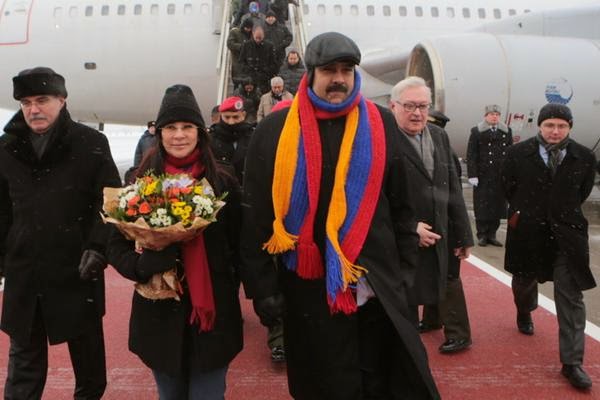 First Russia, where Putin couldn’t fit him in his schedule. After that, China, where he has a date with

Chinese President Xi Jinping during his visit and take part in a meeting between China and the Community of Latin American and Caribbean States Jan. 8-9 in Beijing.

China will be more active in Latin America.