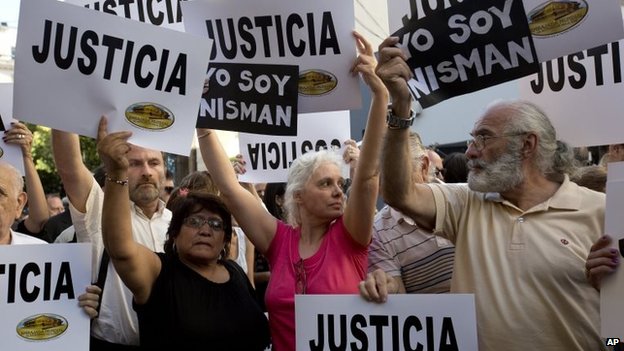 Let’s not lose track of the real story as we examine the details of last Sunday’s assassination of prosecutor Alberto Nisman: His murder is all about Iran.

Through his investigation of the 1994 AMIA bombing, Nisman found out that president Cristina Fernendez had allegedly been secretly negotiating with Iran since 2011, and conspiring to cover up Iran’s role in the 1994 terrorist attack. He brought a civil lawsuit last week, asking the judge to freeze $23 million of assets belonging to Mrs. Kirchner and the others named in the complaint, and was scheduled to testify to Argentina’s Congress on Monday, but was prevented from doing it by a single shot to the head.

Eli Lake writes on Argentina, Iran and the Mysterious Death of a Prosecutor

. . . Nisman made an enemy of Iran, a country with a history of killing its political opponents in foreign countries. In May 2013, Nisman issued a scathing report that implicated several senior Iranian officials by name in the AMIA bombing. Just four months earlier, Kirchner’s government had signed a memorandum of understanding with Iran to investigate the incident. Part of the deal, however, was that Nisman’s investigators would not be allowed to interview senior Iranian officials. Argentina also got a favorable trade pact to import Iranian oil in exchange for grain. Nisman said the terms of the Iran-Argentina joint investigation amounted to a coverup.

The AMIA attack occurred in 1994, before Iran’s government began trying to clean up its image with the rest of the world. It was before Iran elected its first reform government in 1997, and before Iran’s current government agreed to nuclear negotiations with China, France, Germany, Russia, the U.K. and U.S.

And yet many of the senior Iranian officials Nisman named still have influence. They include Ali Fallahian, who is today a member of the regime’s council of experts, the clerical body that would choose Iran’s next supreme leader; Ahmad Vahidi, who served as Iran’s defense minister between 2009 and 2013; and Ali Akbar Rafsanjani, the former Iranian president and a favorite interlocutor of many Western diplomats.

The news of Nisman’s death was first called a suicide. However, since Sunday, details have come to the surface – Here’s what has been revealed as of the writing of this post:

In addition to the Iran allegations, Cristina Fernandez’s administration is also allegedly involved in money laundering and precursor chemical trafficking, according to this report by Douglas Farah. Adding to the list are new accusations of cover-ups by another Argentinian prosecutor, Germán Moldes.

Nis­man had been barred by the Argen­tin­ian gov­ern­ment from tes­ti­fy­ing on Iran’s increased influ­ence in South Amer­ica at a U.S. Con­gress sub­com­mit­tee hear­ing in 2013.

Yesterday evening I was discussing Iran’s expanding influence with David Gerstman who emailed,

Lee Smith recently wrote that in regards to the nuclear negotiations Iran is “pushing through an open door.” It’s not just in terms of the nukes, it’s also in terms of the regional hegemony. The US is willing to cede a huge amount of the Middle East influence to Iran.

The Tower did a post on Iran’s destabilizing influence on the region and noted that when he first proposed reaching out to Iran, Obama said, “actions over many years now have been unhelpful when it comes to promoting peace and prosperity both in the region and around the world; that their attacks or their financing of terrorist organizations like Hezbollah and Hamas, the bellicose language that they’ve used towards Israel, their development of a nuclear weapon, or their pursuit of a nuclear weapon — that all those things create the possibility of destabilizing the region.”

And now to go along with the outreach, the destabilization has only accelerated.

Senator Robert Menendez (D – N.J.), the ranking member of the Senate Foreign Relations Committee, pushed back today against the White House’s claims that Congressional action could derail negotiations with Iran over its illicit nuclear program. In his State of the Union speech last night, President Barack Obama claimed that such initiatives “will all but guarantee that diplomacy fails” with Iran.

In his opening statement to a committee hearing titled “Iran Nuclear Negotiations: Status of Talks and the Role of Congress“, Menendez said:

The more I hear from the administration in its quotes, the more it sounds like talking points that come straight out of Tehran. And it feeds to the Iranian narrative of victimization when they are the ones with original sin: an illicit nuclear weapons program going back over the course of twenty years that they are unwilling to come clean on.

Analysis: Alberto Nisman and the Crisis of Democracy in Argentina

In a lighter mode,