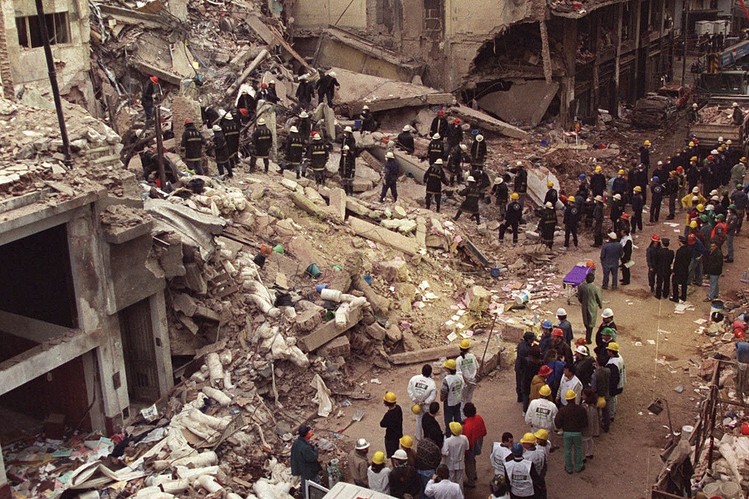 against President Cristina Kirchner , her foreign minister and others, accusing them of conspiring to cover up an investigation into Iran’s alleged involvement in the 1994 bombing

Nisman, who was barred by the Argentinian government from testifying on Iran’s increased influence in South America at a U.S. Congress subcommittee hearing in 2013, accuses Cristina of ordering Foreign Minister Hector Timerman and others to negotiate immunity for Iranian suspects in exchange for allowing Argentina to import Iranian oil. Meanwhile,

Mr. Nisman has asked Judge Lijo to freeze $23 million of assets belonging to Mrs. Kirchner and the others named in the complaint. There was no time frame for a decision to be handed down on whether to proceed with a case against Mrs. Kirchner or the others. Court cases in Argentina can sometimes take many years to resolve.

Nisman inadvertently began uncovering evidence of the plot during the investigation of the AMIA bombing.

In 2009, his sleuthing led to the indictment of Carlos Menem, who was president at the time of the attack. He was accused of tampering with evidence that implicated a Syrian businessman. The case is still in progress.

However, judge Rodolfo Canicoba Corral, in charge of the AMIA investigation, criticized Nisman over procedural issues, saying that “the prosecutor has arrogated powers to investigate other things outside this procedure,” and claims to have found out from broadcast news about Nisman’s complaint.

On her part, Cristina says the accusations are an attempt to destabilize her government.

Nisman claims that the president decided to “not incriminate” former senior Iranian officials for their roles in planning the bombing, and instead has sought a rapprochement with Tehran, “establishing trade relations to mitigate Argentina’s severe energy crisis,” the Buenos Aires Herald reported.

When her agreement with Iran was challenged in the Argentinean courts, “and here is the criminal (aspect), the president ordered to divert the investigation, abandoning years of a legitimate demand of justice, and sought to free the Iranians imputed (in the case) from all suspicions, contradicting their proven ties with the attack. She decided to fabricate ‘the innocence of Iran’,” the newspaper quoted Nisman as alleging.

In 2013, Argentina announced that it would collaborate with Iran in a joint commission “to advance knowledge of the truth about the attack,” as Ms Fernández wrote on Twitter at the time. The country’s Jewish population, the world’s seventh largest, was puzzled and angry about the accord. Now the prosecutor, Alberto Nisman, alleges that the controversial deal was reached in back-channel negotiations that Ms Fernández initiated with Iran. He claims that she offered to cover up the involvement of any Iranian officials in exchange for increased trade. Argentina would export grain to Iran, while Iran would sell oil to Argentina to ease its severe energy deficit.

In the end, for reasons that are still unclear, the negotiations failed and the deal fell apart. But Mr Nisman has marshalled evidence of the talks in a 300-page document that he filed in a Buenos Aires court. “They decided, negotiated, and assured the impunity of the fugitive Iranians in the AMIA case with the aim of faking Iran’s innocence to serve geopolitical and commercial interests,” Mr Nisman declared. The allegations against Ms Fernández, her foreign minister, Héctor Timerman, and others are based on “irrefutable proof” from two years of investigations and myriad wiretaps, Mr Nisman claims.

Argentina’s Kirchner Named in Criminal Complaint
An Argentine prosecutor filed a complaint against President Cristina Kirchner, her foreign minister and others for allegedly conspiring to cover up a probe into Iran’s alleged involvement in the bombing of a Jewish community center.

A federal prosecutor in Argentina has filed a criminal complaint against President Cristina Kirchner , her foreign minister and others, accusing them of conspiring to cover up an investigation into Iran’s alleged involvement in the 1994 bombing of a Jewish community center in this capital city.

The prosecutor, Alberto Nisman, said on Wednesday that Mrs. Kirchner had ordered Foreign Minister Hector Timerman and others to negotiate immunity for Iranian suspects in hopes this would reestablish trade ties and allow Argentina to import Iranian oil to ease a domestic energy crisis. The alleged plan didn’t come to fruition, however.