The Communist elite will profit; the Cuban people will remain oppressed. 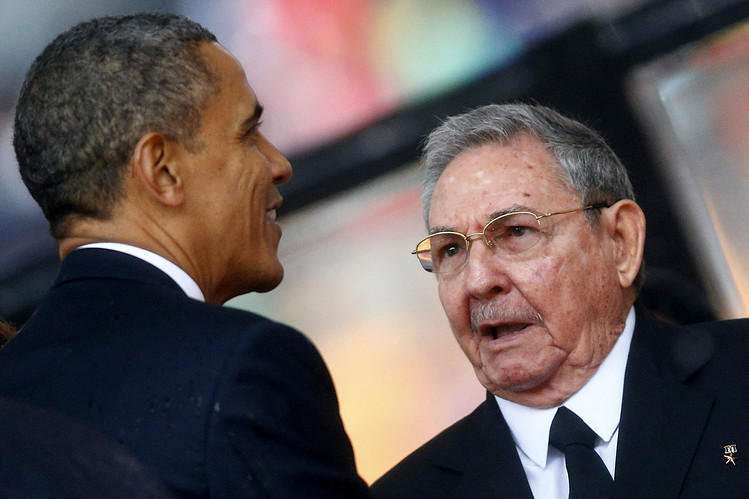 Mary O’Grady asks, Who Benefits if the Embargo Is Lifted?

President Obama appeared to be trying to prove his own revolutionary bona fides when he announced on Wednesday new diplomatic relations with the military dictatorship and plans to make it easier for Americans to travel to the island and engage in commerce with Cubans. He repeatedly linked the isolation of the Cuban people to U.S. policy, as the regime teaches Cuban children to do. He complained that the embargo strives to keep “Cuba closed off from an interconnected world.” In a reference to the limited access that Cubans have to telecommunications, he said “our sanctions on Cuba have denied Cubans access to technology that has empowered individuals around the globe.”

Even the humblest Cuban peasant would split his sides laughing if he heard those statements, which none did because they do not have access to anything other than Cuban state television—speaking of isolation. Cubans know that the island is not isolated from foreigners. According to Cuban statistics in 2013 there were 2.85 million visitors to the island of 11 million inhabitants. These included European, Chinese, Latin American, Canadian and American tourists and investors. In the first six months of this year, according to The Havana Consulting Group, there were 327,000 visitors to Cuba from the U.S.

The isolation (news flash Rand Paul) is caused by the police state, which controls and surveils foreigners’ movements, herding most visitors into resort enclaves. Foreign journalists who vocally oppose the Communist Party line are not allowed into the country.

More visitors won’t do anything to reduce Cuban poverty. The regime pockets the hard currency that they leave behind and pays workers in worthless pesos. Foreigners who decide to reward good workers without state approval can face prison.

It’s true that the Cuban people lack access to technology, but Mr. Obama’s suggestion that it is because of the embargo is a howler. Carlos Slim , the Mexican telecom monopolist and global player; Telefónica , the Spanish broadband and telecommunications provider; Vietnam’s Natcom; Ireland’s Digicel and countless other companies can do business on the island. But they can’t provide Internet access in homes because the state prohibits it.

The Real Cost of Castro Inc.

If relations are fully normalized, American tourist dollars would pour into companies owned by the Castro regime, since tourism is controlled by both the military and General Raul Castro, warns the Cuba Transition Project (CTP).

That means rum, tobacco, hotels and resorts are all owned and operated by the regime and its security forces. Cuba’s dominant company is the Grupo Gaesa, founded by Raul Castro in the nineties and controlled and operated by the Cuban military, which oversees all investments. Cuba’s Gaviota, run by the Cuban military, operates Cuba’s tourism trade, its hotels, resorts, car rentals, nightclubs, retail stores and restaurants. Gaesa is run by Raul’s son-in-law, Colonel Luis Alberto Rodriguez Lopez-Callejas.

The number of foreign companies doing business in Cuba have been cut by more than half since the 1990s, to 190 from some 400. Reasons include: Being forced to partner with army-controlled groups; hire workers through state agencies; and the freezing of bank deposits. Complaints have poured in from former senior executives at Dow Chemical, General Mills, Bristol-Myers Squibb, Colgate-Palmolive, Bacardi, American Express Bank, PepsiCo, Warner Communications, Martin Marietta Aluminum and Amex Nickel Corporation. Iberia, Spain’s national airline which at one time accounted for 10% of foreign commerce with Cuba, killed its Havana routes because they were unprofitable.

The economic benefits of engagement are minor, while the possibility that continued sanctions could be used to engineer regime change — or at least meaningful political concessions — is far greater.

At this point, the best the Cuban people could hope for is the Viet Nam outcome.