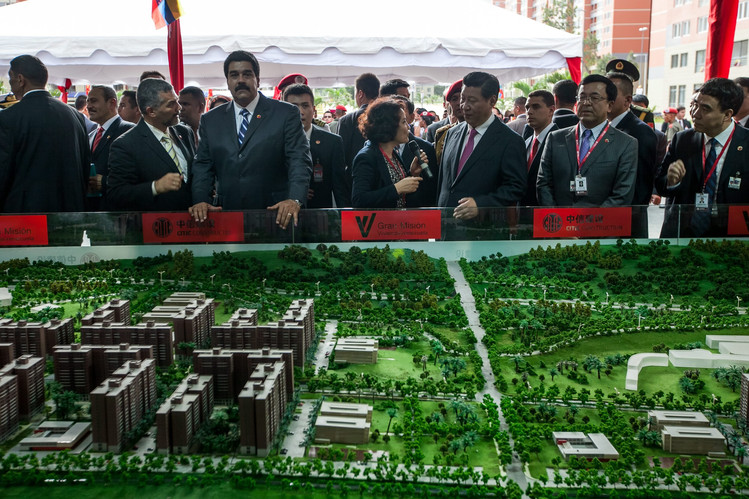 The Chinese pull the chestnuts (temporarily) off the fire:
China Loosens Debt Terms for Venezuela
With Default Threatening the Economy as Oil Prices Tumble, Caracas Gets a Lifeline From Its Biggest Creditor

Not only for Venezuela, but also for Argentina (emphasis added),

Beijing’s largess may appear irrational given economic policies in Venezuela and Argentina that do not appear sustainable, said Barbara Kotschwar, a scholar who tracks Chinese investment in Latin America at the Peterson Institute for International Economics in Washington.

“On the other hand,” Ms. Kotschwar said, “they are so invested in Venezuela’s oil industry that they may have calculated that a political crisis would have a negative impact on their return on investment or on Venezuela’s repayment of loans.”

That’s putting it mildly; according to Maduro himself,

Venezuela’s oil revenues, which account for 96% of the country’s dollar income, are down by 35% in the past month

China has risked millions of dollars in Latin America to secure their supply lines, and as analyst Russ Dallen, managing partner at brokerage Caracas Capital Markets, put it, “for the short term, they’re secure.” However, considering that

China last month scrapped the requirement that Venezuela ship at least 330,000 barrels of oil a day as payment for its existing loans

the meaning of “secure” may be more fluid than we believe – and not only for the short term.