BBC reports,
Mayor held in Mexico missing caseJose Luis Abarca stands up during a meeting with state government officials in Chilpancingo on 8 May 2014
Police in Mexico say they have arrested the fugitive mayor of the town of Iguala, where 43 students went missing in September.

All 43 students are still missing. The BBC has a timeline:

26 Sept: Students from a teacher training college in Ayotzinapa travel to Iguala to protest and raise funds

30 Sept: Iguala mayor Jose Luis Abarca asks for leave from his post, which is granted

19 Oct: Federal police are deployed to Iguala and replace the municipal force

22 Oct: Mexico’s prosecutor general says an arrest warrant has been issued for Mr Abarca, his wife and the town’s police chief

4 Nov: Mr Abarca and his wife are arrested in Mexico City 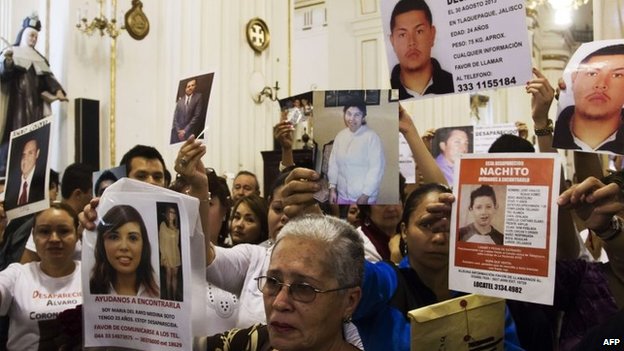 In other crime news, Mexican Regional Security Chief and Wife Shot Dead
Tamaulipas Is Across Border From Texas

The dead man, Gen. Ricardo Niño Villarreal, was security chief for the area around Nuevo Laredo, across the border from Laredo, Texas. The area is considered the turf of the Zetas drug cartel, which has been doing battle with the Gulf cartel.