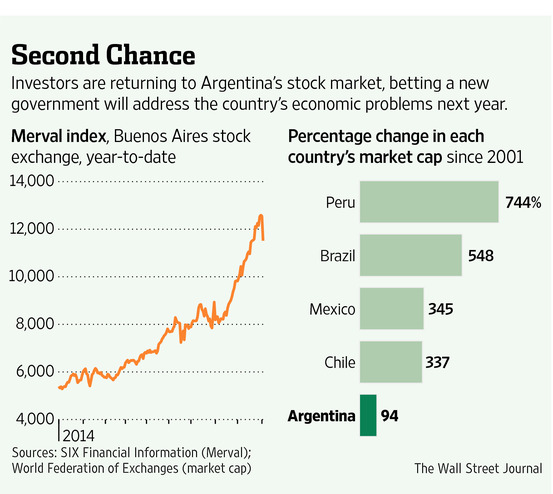 Incurable optimists are betting that Argentina has hit rock bottom:

Argentina’s economy is projected to contract by 2.1% this year and its inflation rate is among the world’s highest. In July, Argentina defaulted for a second time in 13 years. A U.S. judge on Monday found Argentina in contempt of court for its handling of the debt.

Investors see a potential turning point in presidential elections scheduled for October 2015, from which Mrs. Kirchner is constitutionally barred.

Contenders for her post have vowed to work toward exiting default and to adopt policies aimed at righting the economy.

Money managers hope to get in front of a stampede into Argentina should a new government succeed in restoring the country’s credibility in global financial markets.

Snark aside, Argentina has been defaulting on its debt since 1826. The country’s stock market is small, another devaluation is looming, the peso has dropped to a record low against the dollar, the country’s foreign exchange laws and business environment are negative, public spending is out of control, Steve Hanke estimates a 68% annual inflation rate, and, while yields may be high, the central bank’s reserves are dwindling and the government does not have a strategy to solve its domestic economic problems.

Oh yes, it can get worse. When the airlines don’t sell tickets more than 90 days in advance for fear they won’t get paid, you know things are not about to get rosy.

The Merval’s up. Take that as a sell signal.