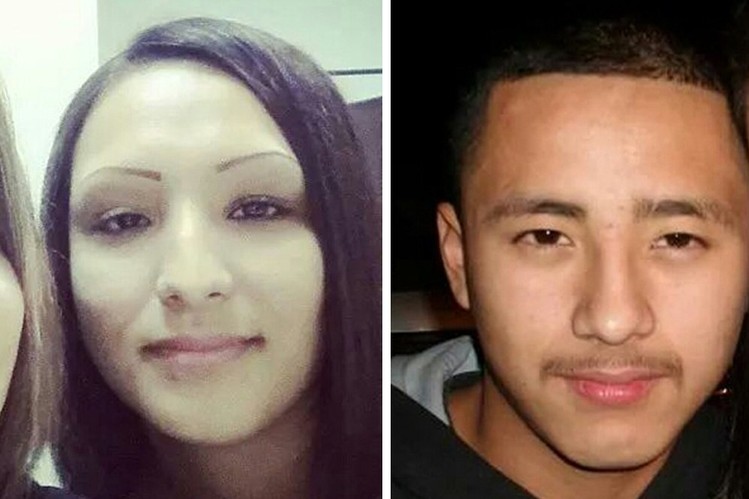 Today I wrote About those walking in NYC for ten hours videos at Da Tech Guy Blog. Please read it, and leave a comment.

Also, in case you missed it, last Wednesday’s podcast talking about the Elections in Brazil PLUS other US-Latin America stories of the week with Silvio Canto, Jr.

Hugo Chavez, who expropriated millions of acres of farmland (along with private properties and businesses) left an enduring legacy:
Venezuela ranks last in Property Rights Index
Lorenzo Montanari, the executive director of the Property Rights Alliance (PRA), said the survey measured the “consistency of property rights in 97 countries” and assessed three aspects: political legal environment, physical property rights and intellectual property rights
The IPRI study, which you can read here, corroborates the fact that

there is a positive, strong, and significant relationship between the strength of property rights protections and a country’s economic performance as measured by GDP per capita. In other Venezuelan news, Leopoldo López refused to appear before a court hearing on Tuesday, demanding the government respond to a UN resolution calling for his release.

Judge Susana Barreiros scheduled the hearing while the court was not in session, having suspended proceedings indefinitely on October 14. López’s lawyers regarded the suspension as an attempt to delay the court’s response to the UN Working Group on Arbitrary Detentions, which requested López’s immediate release on October 8.

After Spanish Prime Minister Mariano Rajoy called on the Venezuelan government to free Lopez, Venezuela recalled its ambassador to Spain.

Lilian Tintori, the wife of opposition leader Leopoldo López, learned that he could be transferred from Ramo Verde military prison to another jail.

Couple dances the length of the Americas
Watch as this young couple travel from Alaska in north America to Ushuaia in Argentina, dancing all the way

I’m sure Rafa and Noelia were inspired by the ever-effervescent Matt Harding,

After Vote, Brazilians Lash Out on Social Media
A day after President Dilma Rousseff squeaked out a close electoral victory, Brazilian voters vented their frustrations one way they know best: on social media.

Many Neves supporters, hailing largely from Brazil’s wealthier south, joked they would be packing their bags to flee to Miami or Orlando. Some posted images showing Brazil divided into two, with the poorer northeastern states which supported Ms. Rousseff hived off into a separate country.

The reactions underscored the divisiveness of the elections, which were the closest in Brazilian history.

Considering all the factors, it would have taken a miracle from God Himself for Neves to win.

Dilma claims, “I want to be a much better president than I have been until now,” which rather fills me with dread, considering how

Brazil has chosen to warehouse a quarter of its population into welfare serfdom for nothing more than the benefit of leftist parties and their grasp on power.

Living up to its reputation as possibly the world’s worst-managed economy, the Venezuela government is appealing the US$1.6billion settlement against Exxon by the World Bank’s International Centre for Settlement of Investment Disputes, or ICSID.

Just to put things in perspective,

Exxon had originally wanted $20 billion out of the deal; arbitrators awarded it just $1.6 billion, $600 million of which had already been paid.

The country must honor ICSID rulings to avoid default of sovereign bonds; by having the ICSID provisionally stay the enforcement of the award, Venezuela buys time.

One of two things is going on here. Either the super-fancy and well-worth-top-dollar New York Law Firm representing Venezuela at ICSID, Curtis Mallet-Prevost, has persuaded Ramírez they can get an even better settlement on appeal or the government is now so strapped for cash they’re willing to try any delaying tactic to avoid having to pay up right away.

I don’t know which one it is.

I don’t either, and considering how Nicolas Maduro opened his campaign by saying he talked to Chavez, who is now a bird , maybe he (and his cohorts) went by Chavez’s 2012 promise that Venezuela will not recognize World Bank ruling in the Exxon case.

All you can be sure of is that law firm Curtis Mallet-Prevost will make money out of this, and, as I said last month, that Venezuela has no intention to pay Exxon. Brazil’s benchmark equity index led global declines as President Dilma Rousseff’s re-election damped speculation for a change in policies that wiped out $553 billion of stock market value and left the economy in recession.

The Ibovespa (IBOV) dropped 2.8 percent to 50,503.66 at the close of trading, the most among the 20 biggest indexes globally. After tumbling as much as 6.2 percent earlier, approaching the threshold for a bear market, the gauge pared losses as education companies and pulp exporters rallied. The real posted the world’s biggest loss as it sank 1.9 percent to a nine-year low.

After years of weak growth, high inflation and intervention, Dilma’s re-election tanked the currency, too,

The real’s plunge to 2.5224 per dollar put it at the weakest level on a closing basis since April 2005. One-month implied volatility on options for the real, reflecting projected shifts in the currency, was the world’s highest. The currency sank 12 percent in the past three months.

Then why did things rise up again?

“To some extent, markets were already pricing in her victory last week, and that may explain why the reaction to the election results wasn’t as negative as I expected,” Alvaro Marangoni, a partner at Quadrante Investimentos Ltda., said by phone from Sao Paulo. “We’re all waiting to see if policies are adjusted so the economy can recover.” 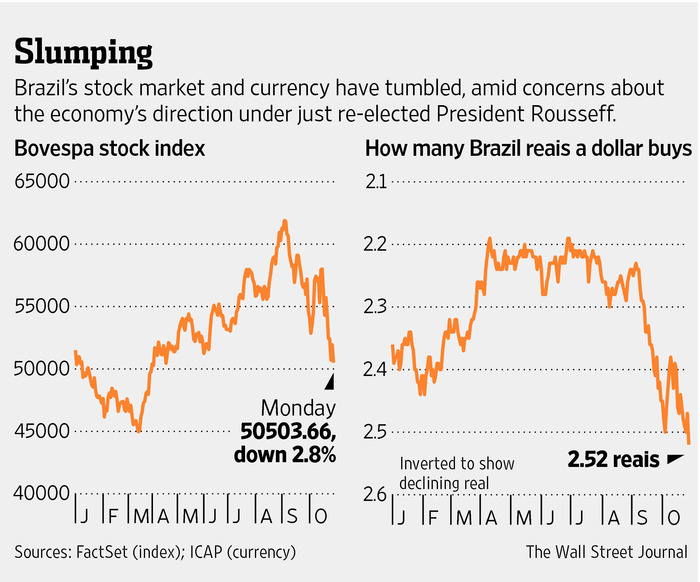 The states that opposed Dilma out in the grasslands, soybean farms, cattle ranches and productive and innovative industrial centers down south, went for her free-market opponent. The states with 25% of the population dependent on welfare went for Dilma,

The takers have become politically stronger than the makers

As Monica Showalter of IBD said,

I was optimistic on Brazil years ago, but no more.