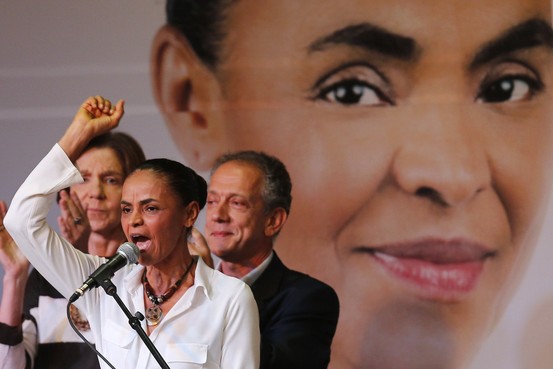 The former Lula cabinet member is now ahead in the polls:
Brazil’s Marina Silva Woos Farmers Ahead of Presidential Poll
Frontrunner Needs Powerful Agriculture Lobby She Alienated as Environment Minister

Ms. Silva doesn’t need the support of farmers like Mr. Ceolin to win the elections in October—an initial Oct. 5 vote and what polls indicate will be an inevitable runoff. All the polls taken since she officially became the Socialists’ candidate, replacing the late candidate Eduardo Campos, show her beating incumbent Dilma Rousseff in the Oct. 26 runoff.

But if she becomes president, strong opposition from Brazil’s wealthy and influential agricultural sector could make governing more difficult, said Paulo Calmon, a political-science professor at the University of Brasilia.

Ms. Silva promises to end Ms. Rousseff’s policy of forcing state-controlled oil company Petrobras to subsidize the price of gasoline to help control inflation, a policy that ethanol producers have strongly criticized because cheaper gasoline boosts competition for ethanol fuel. The Silva stance doesn’t just play to farmers: The prospect of less interference with Petrobras has boosted the company’s shares, and the benchmark Ibovespa stocks index, to the highest levels in more than a year.

Will see how it all develops; Guido Mantega, the finance minister for the last eight years, is on his way out.