We talked about this in last night’s podcast:

Brazilian Candidate Dies in Crash
Eduardo Campos, the Brazilian Socialist Party candidate for president, was killed in the crash of a private jet, upending the October election.

A leftist who was also friendly to business and tough on crime. Mr. Campos had hoped to appeal to both progressives and fiscal conservatives, but his campaign had trouble gaining traction. A recent poll had shown him with about 8% of the likely vote—a distant third behind Ms. Rousseff and her main rival, Aécio Neves of the Brazilian Social Democracy Party.

Campos was in third place behind Dilma and Aécio, but the accident may affect the SP’s standing,

Those standings could change, however, if Mr. Campos is succeeded at the top of the ticket by his popular running mate, Marina Silva, who ran for president herself in 2010 and won about 19% of the vote.

Ms. Silva had been exploring another presidential run again this year, but when her own party, Rede Sustentabilidade, was unable to meet the requirements to get her onto the ballot, she joined Mr. Campos’s ticket as vice president.

A deeply religious, environmental activist, Ms. Silva could attract votes from both the left and right in a way that Mr. Campos couldn’t, said João Augusto de Castro Neves, Latin America director at the Eurasia Group think tank in Washington.

“She will threaten both Dilma and Aécio,” he said.

It was a horrible crash: the plane’s fall damaged seven houses: 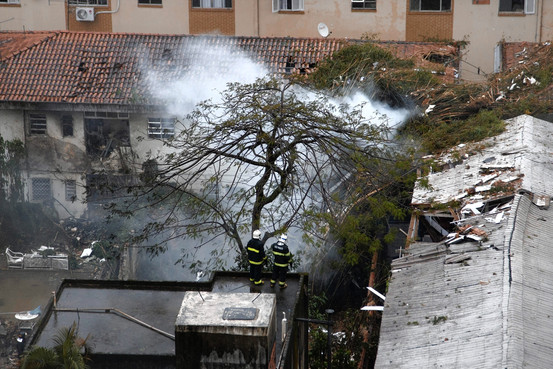 O Globo reports that firemen have found the plane’s cabin and Campos’s wallet (link in Portuguese).

In addition to the seven killed who were aboard the plane, there were six residents injured.