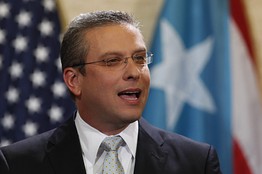 A Puerto Rican default should not surprise anyone. According to Carlos Colón de Armas, acting dean of the School of Business Administration at the University of Puerto Rico, for eight years from 2005 through 2012, government expenses exceeded revenues on average by approximately $1 billion annually. The dean told me by telephone that total commonwealth debt is now around $73 billion and in 2013 it was 101% of the island’s gross national product (GNP) up from 57% in June 2001. (Although gross domestic product is the most widely accepted measure of an economy’s size, it reflects the profits of large multinational corporations booked for tax purposes in Puerto Rico but not retained in the local economy. Therefore, GNP, a measure of what is produced by locals, is a more accurate tool to assess the economy.)

increased expenses by almost $600 million in his first budget. While he is now cutting spending, the cuts are mostly from that increase, according to Mr. Colón de Armas. Some $500 million-$800 million in fat—from subsidies to special interests to funding for political parties—remains untouched in the $9.6 billion budget.

Fortuño lost by 12,000 votes since García Padilla (known as Agapito) promised the moon and the stars.

And there it goes: a certain default.