The spotlight’s on Brazil this week, as the World Cup inaugural game is scheduled for Thursday, June 12 in Sao Paolo. Let’s hope the games don’t turn into a disaster.

In Argentina, Wine, Art and Altitude

BOLIVIA
Chic Stops in the Suburbs of La Paz, Bolivia

CHILE
More Than 8,000 Affected in Chile by Storm

The Economist endorses Santos: Colombia’s presidential election
A vote for peace
To stop the killing, Colombians should re-elect Juan Manuel Santos, while Colombia Politics points out that We’re voting for a president not for peace. Meanwhile, pressure from candidate Zuluaga is already achieving a cease-fire from the FARC.

Colombia to set up truth commissionIvan Marquez, Farc commander, Havana, 27 May 14
Colombia’s government and Farc rebels agree to set up a truth commission to investigate thousands of deaths in five decades of conflict.

Where Are the “Self-Employed” and “Reform” Defenders?

ECUADOR
In the cradle of Ecuadorean soccer, the beach is the fiercest field
Esmeraldas, Ecuador, is home to only 3 percent of the national population but it makes up almost half of the country’s World Cup team. Is the beach the secret?

HONDURAS
More effects of America’s weak foreign policy: U.S. Crew Is Arrested on Honduras River Job
A salvage company has a contract to dredge the Patuca River and raise valuable mahogany and cedar logs, but weapons on the company ship mean time in jail.

MEXICO
In Tampico, Mexico, where the drug war rages, ‘the walls have ears’

LA Times Columnist Is Happy US Marine Is in Mexican Prison

PUERTO RICO
You heard about it from Fausta’s blog, but now BLUE MODEL GOES BELLY-UP
Media Catches Up on Puerto Rico

Work Stoppages at Public Firms in Puerto Rico Against Cuts

Mujica certainly knows how to make a fashion statement: 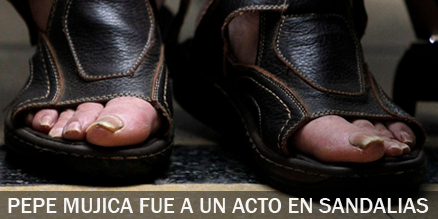 VENEZUELA
21st Century Socialism:
Poverty Shoots Up in Venezuela; as I mentioned last week, in the last year of Hugo Chavez’s life, extreme poverty increased by a whopping 38% over the prior year.

THE FRACAS IN CARACAS
Venezuela Runs out of Drinking Water

The week’s posts and podcast:
Argentina: Secretary of national thought

Venezuela: Leopoldo Lopez to remain jailed while on trial UPDATED