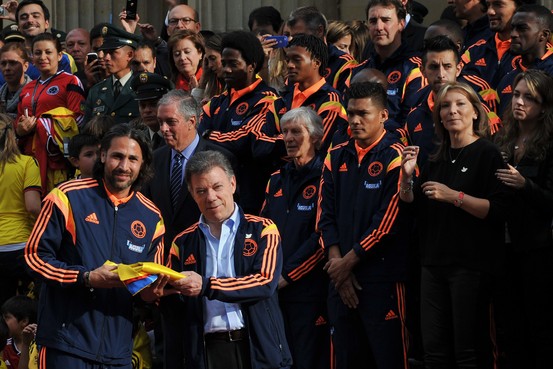 Pres. Santos thinks it’ll get him another term:
Colombian Leader Sets Goal: Win Soccer Match, Then Win Presidency
President Juan Manuel Santos, Whose Job Is at Stake in a Sunday Election, Hopes for a Political Assist from His World Cup Team. I don’t quite get the logic, but apparently it has to do with the thought that larger turnout would favor Santos,

Political strategists say a Colombian victor [sic] against Greece on Saturday in Belo Horizonte, Brazil, could generate a broad feel-good moment for Colombia, drive higher voter turnout the next day and tip the scales in Mr. Santos’s favor over his rival, Óscar Iván Zuluaga.

Ricardo Rodríguez, a soccer-loving doorman from Bogotá, is one fan who plans to forgo voting Sunday. “It’s a thousand times better to see soccer than to go out to vote,” he said.

I don’t know enough of Colombian political thinking to guess whether the average Joe conflates the soccer team with “team Santos”, if at all.

We’ll find out later this evening.