Imagine, if you may, that you live in a country with some of the most stringent firearms laws in our hemisphere. A country with police so corrupt that the government over the drug enforcement function to the marines. A police so impotent with the local drug lords that you and your neighbors, out of desperation, have armed yourselves illegally, and driven out the local drug gang.

Now the government wants you to turn in your guns.

So the compromise was to register the weapons and an invitation to join a new rural police force: 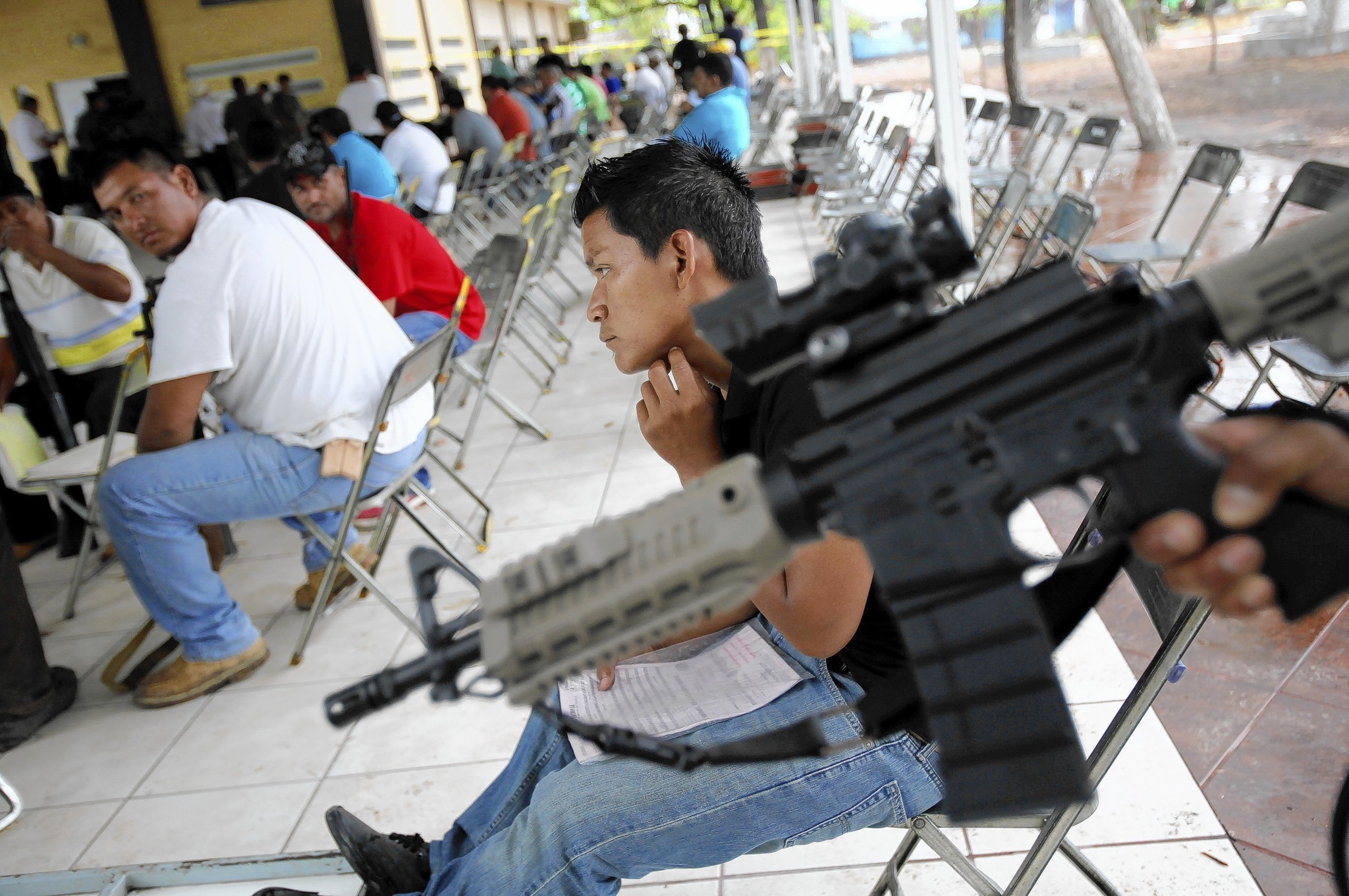 For the first time in modern Mexican history, an armed civilian band has ejected a drug cartel from its environs. For now, members of the so-called Knights Templar are lying low, challenged by rebelling citizens — including some who have returned to their families’ homes from California — finally fed up with unrelenting extortion, kidnapping, arson, rapes and killings.
. . .
Saturday was the federally imposed deadline in Michoacan for thousands of “self-defense” forces, as they call themselves, to register their weapons and formally disband. They are being allowed to keep their handguns and assault weapons (but no rocket launchers or bazookas) and will be invited to join a new rural police force. As of the weekend, at least 3,316 people had signed up and more than 6,000 weapons were registered.

That too is unprecedented; no other Mexican state allows ordinary citizens to legally retain AK-47s and other military-style assault weapons.

Mexico Tries to Demobilize Vigilante Movement
Mexico is trying to demobilize a vigilante movement of assault-rifle-wielding ranchers and farmers that succeeded in largely expelling the Knights Templar drug cartel from their area when authorities couldn’t.

The new rural forces are designed to be a way out of an embarrassing situation, in which elected leaders and law enforcement agencies lost control of the state to the pseudo-religious Knights Templar drug cartel. Efforts to retake control with federal police and military failed. Eventually government forces had to rely on the vigilantes because of their knowledge of where to find the cartel gunmen.

Since the commissioner, Alfredo Castillo, was named in January, federal forces have arrested or killed three of the main leaders of the Knights Templar. The fourth, Servando “La Tuta” Gomez, is in hiding and rumored to be in the rugged hills outside his hometown of Arteaga.

But the vigilante movement has been plagued by divisions, and its general council dismissed one of the founders, Dr. Jose Manuel Mireles, as its spokesman earlier this week because of an unauthorized video he released directed at President Enrique Peña Nieto.

Meanwhile, no one is giving up their guns, even assault weapons prohibited under Mexican law.

Mireles alleges that his police protection was ceased due to his criticisms of the government.

Meanwhile, this local report alleges that some of the vigilantes are protecting and transporting Servando Gómez Martínez “La Tuta”, leader of the Knights Templar (video in Spanish). Allegedly a meeting of the Knights and “los Viagras” – yes, really – vigilantes took place on May 5th, at a place the federal police knew about (9:00 into the video).

The man being interviewed alleges that Mireles was dismissed for not colluding with the Knights.