It’s Holy Week, and taxes are due tomorrow – not exactly the most cheerful way to start a week.

ARGENTINA
Federal police launch huge raid on Argentina’s ‘drug capital’
More than 3,000 federal agents involved in raids on around 80 ‘bunkers’ in the Argentine city of Rosario, plagued by violence between drug gangs

YPF, Chevron to Invest $1.6 Billion in 2014 in Argentina’s Vaca Muerta
Both companies will share equally in the investment outlay, which will go toward drilling 170 wells and building production facilities in Loma Campana, Neuquen. Good luck with that.

Argentina hit by general strike over high inflation and taxes 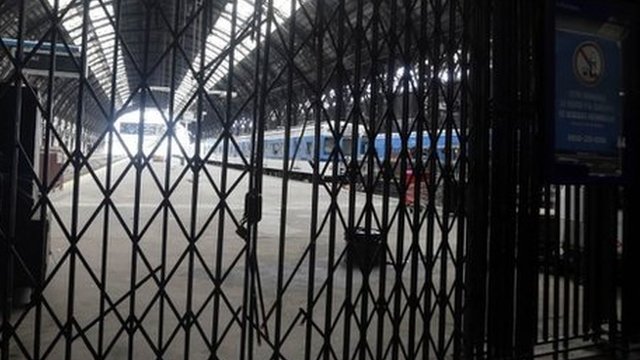 Metro, train and bus services around the country have been paralysed, as Ignacio de los Reyes reports
Public transport in Argentina has been severely disrupted by a huge nationwide strike against the economic policies of the government of President Cristina Fernandez de Kirchner.

BOLIVIA
Is There A Connection Between Hillary Clinton’s ‘Shoe-icide’ Attacker And Che Guevara?

But while everyone is talking about the shoe, little is talked about what the woman also threw along with it: a copy of a Department of Defense document labeled confidential and dated August 1967; it referred to an operation “Cynthia” in Bolivia. Operation “Cynthia” was a Bolivian army maneuver to capture Argentinean doctor and Cuban revolutionary Ernesto “Che” Guevara.

Fighting breaks out in Rio de Janeiro as police move to clear 5,000 squatters from buildings

Brazil 2014: less than half of country favour hosting World Cup
Just 48 per cent of Brazilians are in support of the country hosting this year’s tournament, which begins in June

Colombia has a loose-tongued president.

CUBA
Families of Shootdown Victims: No Spies for Gross Exchange

French Foreign Minister Visits Cuba
A French foreign minister visited Cuba for the first time in more than 30 years Saturday, traveling to the communist-run nation at a time when it is seeking to attract more foreign investment and improve ties with the European Union.

ECUADOR
It’s what you call a totalitarian democracy: Does Ecuador’s leader aspire to a perpetual presidency?
Ecuador’s constitution bars Rafael Correa from running for the fourth term. But this won’t stop him from seeking reelection if ‘the people’ want it, he hints.

LATIN AMERICA
Chinese lending to Latin America
Flexible friends
China lends disproportionately to countries that lack other options and, while on the subject of China, A Pax Sinica in the Middle East? Some Conjectures

Andres Oppenheimer: Latin America’s forecasts may be too rosy

[Mexican Finance Minister Luis] Videgaray said individuals identified by OFAC [the U.S. Treasury’s Office of Foreign Assets Control], or in a similar list put out by the United Nations, could end up being sanctioned in Mexico but that his administration would not necessarily implement all U.S.-identified targets.

PANAMA
Panama Canal expansion draws bigger customers, and criticism
This year marks the 100th anniversary of the Panama Canal, one of the busiest waterways in the world. A massive building project is underway there to widen it for larger ships, but the expansion has not been undisputed.

Bello
Peru’s Italian job
Economic success cannot indefinitely co-exist with political weaknessThe “Italian model” holds that the important thing is that the economy was run by responsible technocrats. How’s that working out?

The real lesson from Italy is that if the political system is unable to act in the long-term interest of the majority, it ends up contaminating the economy with its failures. Peru is a democracy without meaningful parties. A regional election in October is likely to repeat the last one, in which 23 of the 25 regional presidents were independents. Thanks to mining and gas royalties, they command a big chunk of public money. One important region, Áncash, has become a mafia mini-state. Ten political opponents of the regional president, César Álvarez, have been murdered after denouncing corruption. His critics accuse Mr Álvarez, who denies all wrongdoing, of having bought off prosecutors. This month Mr Humala froze Áncash’s bank accounts.

It always amazes me that countless “models” – the Danish model, the Swedish model, etc. – are held as examples worth emulating in Latin America, instead of free market capitalism.

Venezuela’s Protest Movement Fights The Ghost Of Chavez
The legacy of Hugo Chavez hangs over Venezuela — and the country’s protest leaders are having a hard time bringing his followers into their fold. Especially with the armed motorcycle gangs threatening them.

Venezuela’s old men have a dialogue

The week’s posts and podcast:
Venezuela: No food in the shops, but 3 jets for Raul

And now for a Venezuela roundup

Brazil: Airports not ready yet