National Assemblywoman Maria Corina Machado will be leading a demonstration today at 10AM Caracas time,
“Today, #March16, to the streets to defend our sovereignty and dignity! #AgainstCubanOpression and V[enezuela]’s submission to Cuba. C[aracas] 10AM El Indio Square”

The gathering will protest the presence of Cuban military in the armed forces, and student leaders fron several universities are speaking.

Yesterday, Maria Corina Machado and at least one other legislator were attacked as they were about to board a flight at Ciudad Guayana airport.

Maria Corina has more guts than most men, continuing as a true leader, after having had her nose broken at the instigation and in the presence of National Assembly head Diosdado Cabello.

The Cuban regime has ordered snipers to take positions on top of buildings in Venezuela.

exclaiming that he “won’t be bullied,” and warning “prepare yourself, we are coming for you,” if protesters don’t “go home within hours.”

With 28 dead in the last month of protests, things are very serious but as we warned previously, Maduro still enjoying the support of the poor – as EuroNews reports, it appears he is not going anywhere soon. John Kerry also came under fire as the foreign minister called him “a “murderer of the Venezuelan people,” accusing him of encouraging the protests.

He then played John Lennon’s song ‘Give Peace a Chance’ and urged the United States to discuss “peace and sovereignty” in a high level commission mediated by the Union of South American Nations (Unasur).

Maduro, in an interview with Christiane Amanpour, seized the opportunity to speak out of both sides of his mouth, saying that

“Venezuela needs no mediation. . . I believe what it requires is colaboration”.

Also yesterday, in the spirit of such “collaboration,” the Communist government held an event loaded with Fascist imagery, 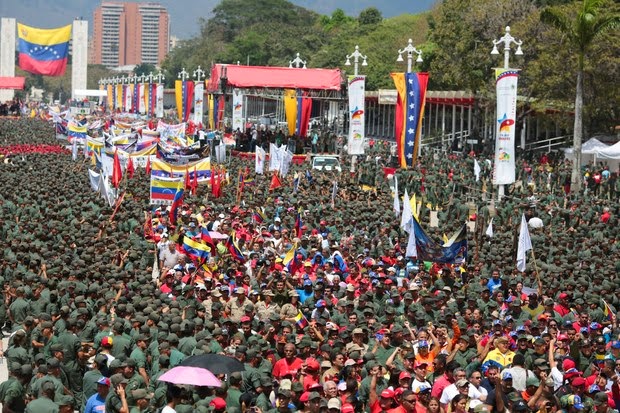 proving Hayek right when he said, “Fascism is the stage reached after communism has proved an illusion.”