My latest at Da Tech Guy Blog, on Ecuador: Donziger guilty of fraud against Chevron

timeline from the WSJ:

YOu can read the entire decision (500 pages) here.

In his opinion, Judge Kaplan noted that Mr. Donziger personally stands to gain more than $600 million in contingency fees and, potentially, control over billions that would go to the plaintiffs were the judgment collected.
…
On Tuesday, the judge ordered Mr. Donziger and his two co-defendants to turn over all property “traceable” to the Ecuadorean judgment to a trust to be set up on behalf of Chevron, and barred them from seeking to enforce the Ecuador verdict in any U.S. court.

A federal judge ruled in favor of Chevron Corp. on Tuesday in a civil racketeering case, saying a record $9.5 billion environmental judgment in Ecuador against the oil giant was “obtained by corrupt means.”

“It is distressing that the course of justice was perverted,” Kaplan wrote in a nearly 500-page ruling that followed a trial last year.

Related:
Will Legendary Law Firm Patton Boggs Be Swallowed or Evaporate? and How the Chevron Case Helped Wreck a Big Law Merger

Last month Locke Lord managing partner Jerry Clements told The Am Law Daily that the potential liabilities and “reputational aspects” of the Chevron matter were a key part of her firm’s due diligence efforts in evaluating a merger with Patton Boggs.

At Chevron’s blog: What You Won’t Learn on Ecuador’s Toxic Tour

I’ve been looking at headlines like “Chavez’ legacy fades in Venezuela as crowds fill the streets”. Whoever came up with that one misses the point altogether: It is Hugo Chávez’s legacy that has brought people out on the streets. As I have explained before,

For over two weeks, the people have been protesting against the government. What started as a students’ protest has spread throughout the country – even the beauty queens are protesting. Why?

The protests accompany inflation officially at 56% (but likely much, much higher); the third-highest murder rate of any country in the world; and, according to an official index, scarce supplies of one out of four staple items needed in every home, such as cooking oil, corn flour, and toilet paper.

Nationalization and expropriation of private businesses, price controls, huge corruption, government printing money to finance itself (including having to pay bond yields higher than all 55 emerging markets tracked by Bloomberg) are all part and parcel of a ruined economy. The scarce benefits that may have accrued under Chavez are being eaten away fast by the crisis.

One of the causes for the rampant criminality is due to the multiple times when, urging his “Bolivarian Revolution,” Hugo Chavez  encouraged the poor to steal while he created a favored class, instead of directing his regime towards the rule of law. Chavez armed gangs that repressed opposition demonstrations (and, make no mistake, they’re on the attack now). He named to his cabinet men who were designated as “Tier II Kingpins”  by the U.S. Treasury’s Office of Foreign Assets Control. To worsen things, as part of his “war of all the peoples”, Chavez forged close ties with Iran and Hezbollah.

Add to how socialism has destroyed Venezuela, the regime’s suppression of the media

Chávez publicly declared himself a Marxist almost a decade ago, urging even the Catholic bishops to read “Marx, Lenin and the Bible“, but the WaPo says, “In Chávez’s big shoes, Maduro stumbles“.

Well, what the hell else do you expect, when the “big shoes” beat the country’s path to ruin?

Then there’s the outright dishonesty of some reports: Does this look like 5,000 people to you?

It did to AP’s Venezuela Bureau Chief Joshua Goodman. Alek Boyd takes Goodman to the woodshed over Misreporting Venezuela. Not that Goodman is alone. Why do they do it? (emphasis added)

In the opinion of Goodman et al, what we have here is a government supported by brown-skinned, poor, disenfranchised people trying to survive a wave of violence, unleashed by radical, conservative, educated middle classes, bent on wresting control through undemocratic means, to then surrender sovereignty to U.S. interests. Never mind the brutality, torture, and assassinations of innocent, and unarmed, students and civilians. Never mind the excessive use of military force to placate peaceful demonstrations. Never mind the presence of a de facto Cuban occupation army. Never mind the fact that chavismo has never won overall control of student and authorities bodies of Venezuelan universities, where voting is still done manually.

Chavismo needs / must advance this notion of it being democratic. Since parts of its discourse marries well with widespread anti Americanism, the BBC, Goodman et al do a fantastic job at misinforming the uninformed and the ignorant. Not only do they misrepresent the crisis, they also misrepresent the parties. No word would be read from this lot on how the “moderate” wing is supported by utterly corrupt chavista bankers and political operatives that are, in no small part, responsible for the current situation.

The “moderate” wing, by the way, that some refer to as the “official opposition”.

Boyd’s essay points to the importance of social media when the MSM abdicates its duty to present facts:

However, no amount of manipulated subjectivity passing as objective journalism can win the day against social media. While the reach of BBC and AP is, most certainly, global, it pales next to that of Twitter and Facebook, where the Venezuelan crisis is being reported in real time, unedited, by hundreds of thousands of citizen reporters armed with smartphones.

And while you’re at it, get rid of those “big shoes” of Chávez “reporters” are trying to throw at you.

This is not Ukraine: Venezuela will erode, not explode

Most deeply buried news item of the day: Iranian envoys in Cubazuela

Venezuela’s demonstrations continue to be the week’s top story, in spite of the media blackout. Take some time to look at photos and read about The Venezuela Paradox,

After three weeks of repression, fifteen dead, at least 60 reported tortured and more than eight hundred detained, including opposition leaders and reporters, the Venezuelan students have at least shown the world what little respect the Maduro administration has for the human and civil rights of the people.

Two Years After Expropriation, Argentina and Repsol Sign Accord on YPF
The agreement establishes compensation for the Spanish oil firm of $5 billion in dollar-denominated government bonds, a debt that will be settled by 2033, at the latest, if the bonds are held to maturity

Upcoming meme alert: Expect MSNBC to start referring to the Venezuelan demonstrations (if they ever notice them) as “attempts at a soft coup”, Presidenta argentina habla de ‘golpe suave’ en Venezuela

The military police are not part of the armed forces, and yet they operate according to military principles of rank and discipline. They cannot strike or unionize, and are subject to a military-style penal code (meaning transgressions at work can be treated as mutiny or treason, and officers are tried in a special court). They are prohibited from “revealing facts or documents that can discredit the police or disrupt hierarchy or discipline.”

They also can’t openly disapprove of the acts of civilian authorities from the executive, legislative or judicial branches of government, and are forbidden to express their personal political opinions.

Brazil Sings a New Tune
As millions leave poverty behind, Brazilian funk is moving from the slums to the mainstream

“This is a site on par with Dinosaur National Monument here in the United States, a whole hillside littered with dinosaur skeletons. We seem to have the same thing except with whales here in Chile.”

CUBA
From The Economist story (also posted under Panama, below): Caribbean ports and the Panama canal
Ripple effects

Brazil and Cuba agreed in 2009 to develop the port of Mariel, west of Havana, through a partnership between Brazil’s Grupo Odebrecht and a state-owned Cuban company, with PSA International of Singapore as operator. The port has been dredged to a comfortable 18 metres and was inaugurated in January. But a major transshipment role is blocked by the American trade embargo: ships which have been to Cuba are barred for six months from American ports. More time to complete the Panama expansion means more time for the embargo to lift.

Lining a Dictator’s Pockets
No good would come of lifting the embargo on Cuba.

For all the talk of sovereignty and non-intervention across LatAm these days, why is the #Cuba presence in #Venezuela of so little concern?

GUATEMALA
The Fine Tapestry of the Kaqchikel Women of Guatemala

HAITI
UN official urges Haiti compensation
A UN official breaks ranks with the world body, and calls for compensation for Haitian victims of a cholera outbreak many blame on peacekeepers.

The new locks will accommodate ships which can take almost three times that load and need a draft of over 15 metres.

These monsters will slash shipping costs for Pacific cargo en route for Atlantic ports, and boost the 6% share of world trade that the Panama canal now claims. 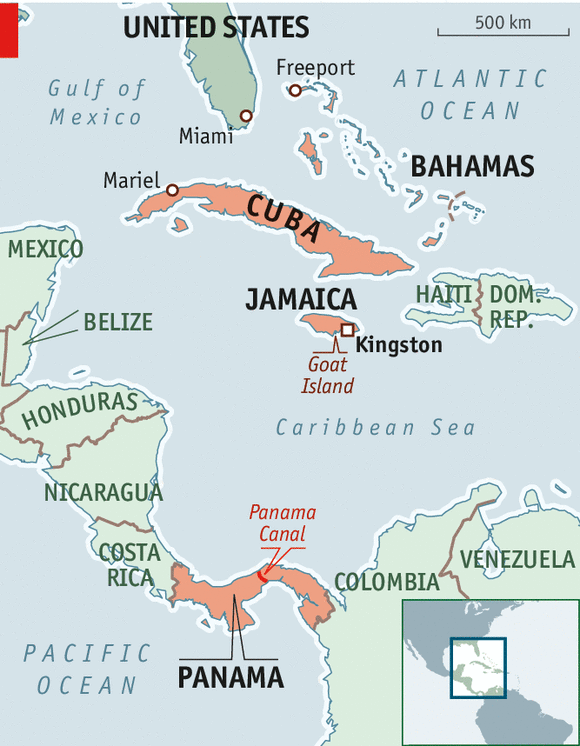 The WSJ lists Venezuela’s Opposition Leaders
University students have been the backbone of the antigovernment movement, but demonstrators recently have looked to Leopoldo López, a former mayor of the Chacao district of Caracas and leader of the Popular Will party. Read more about the opposition to President Nicolás Maduro.

The U.S. Was Ready to Impose Sanctions on Ukraine. Why Not Venezuela, Too?

How Chavez planted the seeds of violence

‘A Perfect Storm’: The Failure of Venezuela’s New President
He was hand-picked by Hugo Chávez, but Venezuelan President Nicolás Maduro has lost control of the country’s economy. Vast protests have been the result, but the government in Caracas has shown no signs of bending.

The week’s posts and podcast:
Latin America at the #Oscars2014

Rubio’s speech on Cuba and Venezuela

Mexico: How Chapo was nabbed

At Da Tech Guy Blog:
What would it take for Latin America’s left-wing populist economies to turn around?

Venezuela: “Don’t you get weary!”

To all the dreamers out there around the world watching this tonight in places like Ukraine and Venezuela, I want to to say we are here, and as you struggle to make your dreams happen and live the impossible, we are thinking of you tonight.

Venezuela don't give up, everybody has the right to express themselves! #SOSVenezuela #PrayForVenezuela

In Venezuela, most TV viewers could not watch the event as the private channel Venevision, for the first time in several decades of carrying the Academy Awards, did not broadcast the show Sunday night, which is hardly surprising, considering the Twitter campaign,

Mexican Alfonso Cuarón was a double winner: Mark Sanger and he first won for Best Film Editing (a category close to my heart), causing Paco Almaraz to quip,
“And, as if were a livestock fair, the price of Alfonso Cuarón’s semen just quintuplicated . . .”

Once Cuarón took another Oscar for Best Directing, a commenter in Almaraz’s feed was wondering if Cuarón would get cloned.