Former president Álvaro Uribe is favored to win, while the coalition of president Juan Manuel Santos will likely to retain its majority in both chambers.

Uribe has been scathing in his criticism of the peace talks held in Havana.

The headlines are interesting:
Colombia to Elect New Congress in Gauge of Peace Talks Support

Voters will elect all 102 Senators and 166 Lower House Representatives on March 9, in an election that pits Santos’ allies against former President Alvaro Uribe, whose Democratic Center Party opposes the negotiations with the rebels.

The government has been holding peace talks in Cuba since 2012 with guerrillas from the Revolutionary Armed Forces of Colombia, or FARC, in a bid to end a civil conflict that began half a century ago. A strong showing for Uribe’s allies will make it “rough going” for Santos if he wins a second four-year term in presidential elections in May, said Michael Shifter, President of the Inter-American Dialog in Washington.
…
Uribe and his supporters oppose any deal that would give FARC leaders immunity for crimes, or which would allow them seats in Congress. Uribe also advocates a tougher line on the government of Nicolas Maduro in Venezuela, whose country he has described as a “paradise” for terrorists and drug traffickers.

The WSJ went with the Uribe-as-Juan Valdez campaign photo: 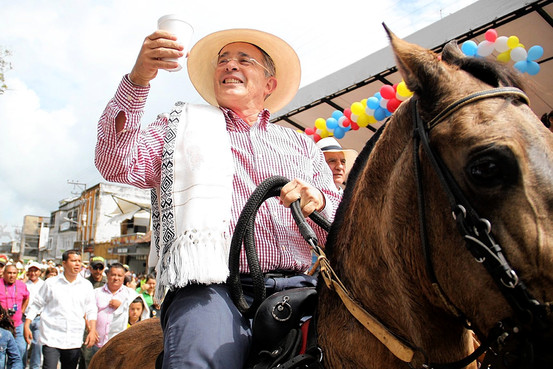 Ex-Colombian Leader Declares War on Peace Process
Álvaro Uribe is expected to face off against his successor President Juan Manuel Santos from the Senate seat he’s expected to win on Sunday. (emphasis added)

Mr. Santos is pursuing a peace agreement with Latin America’s last powerful insurgency, the Revolutionary Armed Forces of Colombia, or FARC, talks that have strong support from the Obama administration. If approved, that agreement would likely include pardons for guerrilla commanders and allow them to enter politics, people close to the talks say.

The talks and the concessions are loudly opposed by Mr. Uribe and his allies, who continue to advocate for a military and judicial approach to end the war.

“There has to be justice,” Mr. Uribe said in a recent speech. “If it’s necessary to give the FARC reduced jail sentences, then fine. But we can never agree to impunity.”

It is worth pointing out that Santos himself has stated that he believes Colombians would accept a deal granting unelected guerrilla leaders seats in Congress if it brings an end to a conflict that has left 220,000 dead.

Voters would pass a referendum containing unpopular measures such as the transformation of the FARC into a political party and special treatment in the justice system for crimes committed by guerrillas, as part of a package that ends half a century of bloodshed, Santos said.

What Santos wants is to place unelected, guerrilla leaders in Congress after granting them amnesty.

Colombia politics predicts Uribe’s party will gain the most seats, but abstention and protest votes will emerge as the real winners on Sunday. Read their full post.