The Venezuela Crisis Exposes Political Split in Chile
Ruling Coalition Divided over President Nicolás Maduro’s Crackdown on Protestors, since Maduro will be attending Bachelet’s inauguration, and is expected to canvass other dignitaries for support, having called for a meeting of UNASUR,

The Venezuelan leader has called for an emergency meeting in Santiago of the South American regional grouping, UNASUR, which is heavily influenced by Venezuela and its closest allies, Bolivia, Ecuador and Argentina. The meeting is expected to take place following the inauguration.

fashioned her wide-ranging “New Majority” coalition to beat an incumbent conservative government in recent elections. She is now caught between her own Socialist party, communists and other hard-left supporters who back Mr. Maduro, and center-right Christian Democrats who blame the Venezuelan leader for a heavy-handed crackdown.
…
Socialist and communist party lawmakers in Chile blocked Mr. Walker’s resolution in the lower house, denying that abuses are taking place and casting Mr. Maduro as the victim. 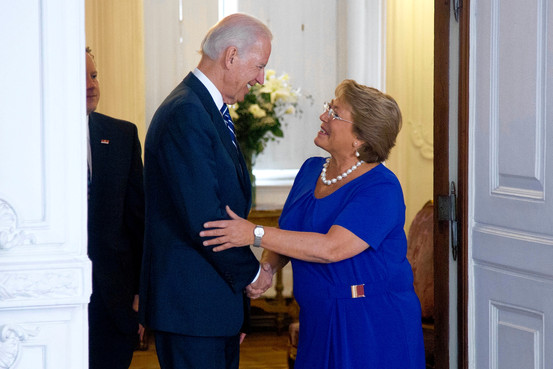 Joe Biden’s in Chile for the inauguration where

he called the unstable situation in Venezuela “alarming” and said the Caracas government lacked even basic respect for human rights.

Bachelet has already proposed increasing corporate taxes and close tax loopholes to sponsor a system of free college education, changes to the constitution, and more spending to address inequality.