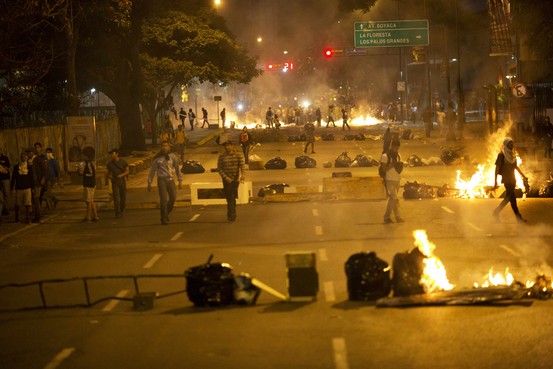 Not “a slow news week” at all.

I was listening to a podcast yesterday where the guest complained of it being “a slow news week”. Dude! The federal government is trying to unleash the FCC on the TV and cable networks here in the US, Ukraine is burning (here’s a before-and-after) in no small part thanks to Olympic host Putin, and five people have been killed in Venezuela (a country that provides 10-15% of the USA’s oil, who supports Iran, and is directed from Cuba) by unofficial chavista shock troops and the “colectivos“, after two weeks of escalating protests over soaring inflation, rampant crime, and chronic shortages, and you call this “a slow news week”??

Some of it has to do with the mainstream media ignoring the Venezuelan story; a Venezuelan Journalist Rightly Wonders Why American Media Ignores Unfolding Crisis. Some has to do with Latin America’s Complicit Silence in Venezuela. Indeed, it is right to ask, Are the Americas turning a blind eye to chaos in Venezuela? Add to that,

Seeing that Ukraine and Venezuela are now aflame, joining his other diplomatic successes in the Middle East and North Africa, Kerry has decided to focus his languorous “energy” on the greatest threat of all, “global climate change.”

But, Dude, it’s happening, and Ukraine And Venezuela: This Ain’t No Velvet Revolution

In their protests, Venezuelans seem to be counting on a Velvet Revolution against these Cuban communists who, remember, didn’t fall during the real Velvet Revolution that took down a string of communist regimes in 1989. They seem to believe the Chavista regime, faced with massive peaceful protests, will melt away in shame, leaving office to let the good guys take over.

But here’s the irony: Over in the real land of Velvet Revolutions — Eastern Europe — there are no such illusions. Nobody in Ukraine thinks there will be any Velvet Revolutions there.
That’s why that uprising is a far more consequential pitched battle against a regime that clings to power at all costs because its fundamental control over the government and the people is now seriously endangered.

In fact, Cuban backups have landed to help the regime squash the opposition. This is No Venezuelan Spring: 4500 Cuban Military on Venezuelan Soil: $10B Annual US Subsidy at Stake – and the 4,500 does not include the 60,000 or so personnel imported from Cuba as “doctors”, etc.

Leopoldo López’s wife tweeted for him, since he’s in prison,

Maduro, stop the lies and fantasies. I do not negotiate, nor will I negotiate, with dictators. I presented myself on my own terms.

Venezuela’s Revolution Will Be Tweeted

Twitter has become especially valuable as a platform for political expression as Maduro has cracked down on independent and opposition news outlets (a paper shortage in the country hasn’t helped matters). Last week, the Venezuelan president blocked access to NTN24, a Colombia-based news channel, after it broadcast live coverage of the country’s violent protests (as the pseudonymous Venezuelan blogger Daniel Duquenal puts it, all “airborne media” is censored in the country). Now, the government is moving to squash social media, even as it harnesses the same platforms to advance its own agenda. Twitter recently reported that Venezuelan authorities had blocked users’ access to images from demonstrations, and protesters claim that police are confiscating their cell phones.

As López told Venezuelans in a video he recorded in the event of his arrest, “I invite you to become your own media outlet.”

After CNN reporter Karl Penhaul and his crew were assaulted by police in Caracas for doing their job, Chavez’ Heir Threatens to Expel CNN From Venezuela “if it does not “rectify” its coverage of political turmoil in the Latin American country.”

There’s the nature of the story itself: Alek Boyd (whose own blog, Infodio, has been censored since 16 Jan 2014) writes,

Events in Venezuela are happening at a speed that makes impossible for traditional media to keep tabs. Protests are not taking place only in Caracas, the entire country is up against chavismo. Opposition leaders have called for a demonstration tomorrow, which is likely to turn into hundreds of thousands of people across the country taking to the streets to support students protests and to decry the deaths, injured, torture and the horrible economic situation.

The protesters will have to persevere – the question remains, will the military take their side? There are some signs it may.

Yes, The left has a blind spot on Venezuela. When will it acknowledge that Chavez’s socialist dream has turned into a nightmare?.

So Dude, what’s your excuse?

UPDATE:
Linked to by Maggie’s Notebook. Thank you!

Venezuela orders troops into border city amid fierce clashes
Objects placed by opposition protesters block a road in the Altamira neighborhood of Caracas, Venezuela
Paratroopers sent into San Cristobal in the border state of Tachira and an internet blackout imposed, as residents say they are living in a ‘war zone’