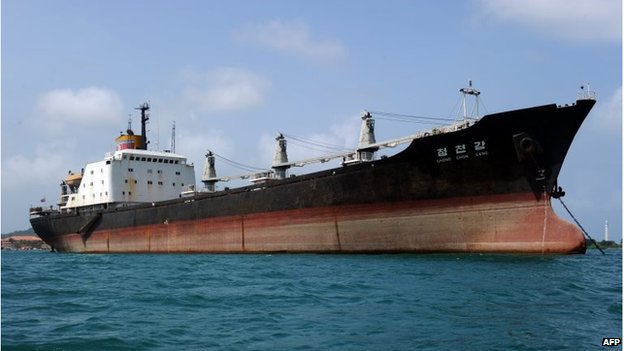 The ship was seized seven months ago with Soviet-era weapons and fighter jets hidden under sacks of sugar.

Three members of the crew stayed behind to face arms trafficking charges.

The captain, the first officer and the political officer of the Chong Chon Gang face sentences of up to 12 years.

Panama will be having a garage sale,

Panamanian officials quoted by Reuters news agency said the arms would likely be sold or given away and the sugar sold to companies interested in turning it into ethanol.

The ship’s automatic identification system was turned off to hide its stop at the Port of Mariel. Moreover, while the logs showed multiple ports of call, they omitted the Mariel stop.

This is the same Mariel port that the Brazilian conglomerate, Odebrecht, has been expanding (since 2011) in partnership with Castro’s military.

In other words, this Cuba-North Korea weapons transfer occurred right under Odebrecht’s nose (at best).

Why? Perhaps because in addition to the port, Brazilian construction and infrastructure giant Odebrecht is planning to build a plastics plant in Cuba