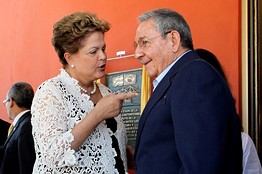 Yes, Cuba, one of the world’s deadbeats.

Brazil Tries to Borrow Its Way to Prosperity
A five-year credit spree by state banks threatens the country’s competitiveness.

The Brazilian government’s development bank—known by its Portuguese initials BNDES—has dumped almost $700 million in subsidized credit into Cuba to finance the renovation of the Port of Mariel. On Jan. 27, Mrs. Rousseff cut a ribbon at the project and promised another $200 million in BNDES credits for a second phase of construction. On the same day the Brazilian newspaper Valor Economico reported that Cuba is now the third top destination for BNDES loans.

And that’s only one of several bad loans:

There is also the question of quality in what is a highly politicized loan portfolio. In October the Economist magazine reported “leaked documents show that Caixa’s analysts think default rates will be 30-50%.” BNDES seems to have plenty of dogs too. It reportedly lent the companies led by smooth-talking Eike Batista some $4.7 billion. His empire collapsed last year after his oil company OGX filed for bankruptcy.