Princeton University professor Sean Wilentz, contributing editor of The New Republic, asks, Would You Feel Differently About Snowden, Greenwald, and Assange If You Knew What They Really Thought?

The payoff of the Snowden affair for Putin and the Russians thus far has been substantial. Just as the Kremlin’s human rights reputation, already woeful under Putin, has spiraled downward, it is able to swoop in to rescue an American political outlaw, supposedly persecuted by the Obama administration. The dissident journalist Masha Gessen has observed, “The Russian propaganda machine has not gotten this much mileage out of a U.S. citizen since Angela Davis’s murder trial in 1971.” As reported earlier, the barriers and fences were torn down in Old San Juan; later on a judge issued an injunction blocking checkpoint searches.

My sister attended the festival yesterday, and reported that this year’s festival is a success:

In addition, there were

The huge crowd filled the streets, and were polite and friendly. The only altercation reported was a minor scuffle that was broken up by a policeman.

In all, a huge success. 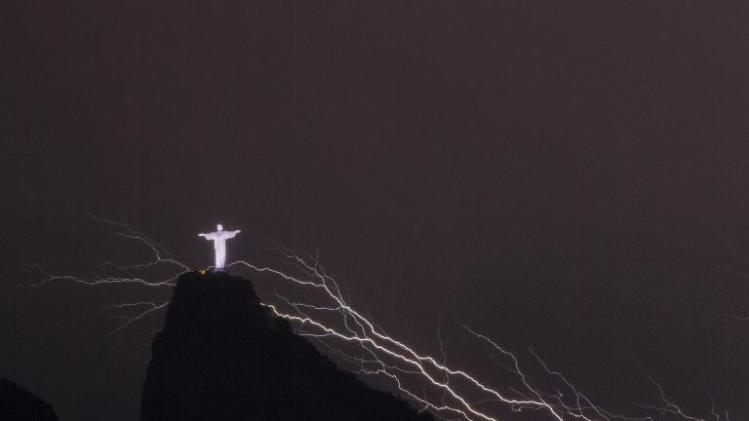 The iconic statue of Jesus overlooking Rio de Janeiro, one of the city’s most recognizable landmarks, has lost a thumb tip to lightening, a report said Friday.

Christ the Redeemer, the giant monument and tourist magnet that looms atop nearby Mount Corcovado, was damaged in a huge storm Thursday night, O Globo newspaper reported on its website.

Remember when Hugo used to absent himself?

As of Thursday, it had been 37 days since she last spoke in public. And she hadn’t posted any messages to Twitter since Dec. 13, when she fired off a typical volley of 20 tweets.

That has been feeding speculation in Argentina about her health in the wake of surgery on her head in October, and questions about who is running the country.
…
Fernandez made her last public appearance on Dec. 10. Three days later, she made her last comments on Twitter criticizing a protest by police.

Her last official photograph was taken on Dec. 19 at a meeting held at an Islamic center.

Cristina’s scheduled to attend the Community of Latin American and Caribbean States on Jan. 28 in Cuba, and the Mercosur meeting on Jan. 31 in Venezuela.

If she doesn’t make it, Uruguayan president José “Pepe” Mujica won’t be able to hitch a plane ride to those events.

Well, the latest is that the $1million fine was bargained down to a devilish amount which better suits the evil Communist regime.

That fine has now been reduced by a third to $666,666, and the North Korean government has pledged to pay it next week, Panama’s Foreign Ministry said in a statement Thursday.
Panamanian Foreign Minister Fernando Nunez Fabrega said 32 of the ship’s 35 detained crew members would also be allowed to leave the country.

Hopefully it won’t be paid in counterfeit money.

No word as to what happens to the weaponry.

More than a week after surviving a plane crash, the injured Mexican militia leader Jose Manuel Mireles rejected the government’s call for his movement to disarm, vowing to fight on until the drug cartel leaders in his area have been arrested and the state of Michoacan establishes the rule of law.

Mireles, a 55-year-old surgeon who leads the militia movement that has spread rapidly over the past year across Michoacan and seized territory from the Knights Templar drug cartel, spoke to reporters late Monday from a safe house after being treated at a private hospital in Mexico City.

As you know, militias fighting the Knights Templar cartel in Michoacán state got smashed by the government, leaving 2-4 militia dead.