In fact, thanks to its strong economic growth and growing international influence, 2014 has the potential to be Latin America’s best year yet.

Latin America’s economic growth will only increase in its upward trajectory in 2014, driven by countries such as Brazil, Chile and particularly Mexico. According to the U.N., “Based on promising signs of private consumption and manufacturing, the region will see [expected] growth rates of 3.6 in 2014 and 4.1 percent in 2015, according to World Economic Situation and Prospects 2014, a report that launches in January.” The U.N. Economic Commission on Latin America forecasts that Latin-American Economic development will be the highest of all global regions for 2014. Brazil is slowing down compared to its explosive performance in recent years, but still very strong. Brazilian finance minister Guido Mantega said in December that foreign direct investment continues to be robust and, according to the Wall Street Journal, “pointed to $8.3 billion in foreign direct investment posted in November as a strong signal investors continued to favor the country. In October, the figure was $5.4 billion.”

McMahon looks at Mexico, Chile and Brazil, and concludes,

All in all, things are looking up for Latin America next year, and as they’ve shown in multiple avenues, the sky’s the limit.

I am cautiously optimistic about Mexico: their recent (and very overdue) reforms may have staying power, which will propel a new era of growth and prosperity – if the opposition allows it.

I’m not optimistic on Chile: re-elected president Michelle Bachelet has promised to amend the constitution, and to expand the welfare state by raising tax rates and taxing shareholders on retained earnings along with the dividend taxes they already pay. She’s also asking for an “exhaustive review” of the Trans-Pacific Partnership; the Partnership was one of the few authentically good news of 2013 for the region,

If Bachelet’s changes include changing the way proceeds from copper are used (since 2000 this process has been carried out according to a rule that requires generating a structural surplus equal to 0% of the Gross Domestic Product), Chile may be in for disastrous economic policies. She had attempted to use those mining revenues during her first term, and promised “likely changes to include altering mining royalties and funding programs” during her re-election campaign.

McMahon is very bullish on Brazil hosting the World Cup this year and the Olympics in 2016, because of the “worldwide media attention,”

which will help Brazil, and Latin America more broadly, brand itself on the global stage as vibrant and culturally rich a place as any in Europe or the United States.

Some of us thought it already is “as vibrant and culturally rich a place as any,” but the question is, how will Brazil emerge financially after the billions of dollars spent on these two hugely expensive events?

Just a month ago, The Economist published this:
Brazil’s economy
The deterioration
Slow growth, stubborn inflation and mounting deficits 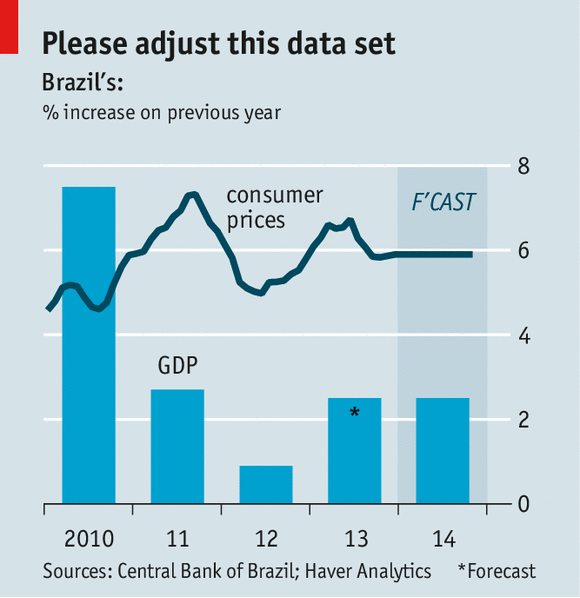 But the facts right now point to a flat economy that may lapse into recession.

Turning a profit on World Cups and Olympics is a risky business, and Brazil rolled the dice twice, once for the World Cup, and once for the Olympics; the structural problems of slow growth, inflation and deficits will remain, regardless of the outcome, because of its government’s current economic policies.

The policy mix of harsh capital controls, restrictions on imports, and a series of nationalizations has severely undercut economic freedom. Regulatory pressure on the private sector has continued to rise, with populist spending measures and price controls further distorting markets. The central bank’s independence was essentially destroyed in 2012 when its charter was changed to allow the government unlimited use of the bank’s reserves to pay its debts. Efforts to reform the rigid labor market have long been stalled.

As it collapses into communism, Venezuela‘s,

Indeed, I hope McMahon is right in saying “the sky’s the limit;” but from where I see it, there’s a lot of pie-in-the-sky there.