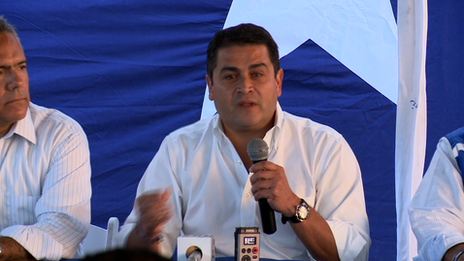 Honduras held its presidential election yesterday, and the Ruling National Party Appears Headed For Win in Honduran Vote
Leftist Coalition Has Yet to Concede Defeat in Presidential Elections

If Mr. Hernández is ratified as the victor, it would be a major setback for Mr. Zelaya and his wife, who had formed the Libre party as a protest vote against the country’s traditional politics, dominated for decades by two political parties, the conservative National Party and the center-right Liberal Party.

Mary O’Grady is not optimistic:
Turmoil Is Expected After Honduras’s Election
A Central American democracy is in trouble thanks to Obama’s foreign-policy choices.

The Obama administration tried to force Honduras to violate its constitution and restore Mr. Zelaya to power. All of the country’s institutions refused.

That crisis remains a rare moment in Central American history when a U.S. president joined Fidel Castro and his allies in an effort to strong-arm three legitimate branches of a friendly government. Secretary of State Hillary Clinton even stripped the members of the Honduras Supreme Court of their U.S. visas. Just as rare, the rule of law prevailed.

Yet the bullying by Washington took its toll. The newly elected president, Porfirio “Pepe” Lobo, was keenly aware that Honduras was out of favor with the U.S. and other left-wing governments in the region. He set about to placate them. One of his most controversial decisions was to grant amnesty to Mr. Zelaya, who ought to have been tried for his high crimes and misdemeanors.

As the Diplomad puts it, The USA is now basically irrelevant to events in Latin America. Another triumph of the Obama foreign policy team.

And yet, compared to Saturday’s deal with Iran, it pales by comparison.