A crane collapsed this week killing two workers at Arena Corinthians, the stadium in São Paulo set to host the opening game of the 2014 World Cup.

Now Brazil Orders Partial Halt to Stadium Construction After Accident
Brazil’s government has ordered a partial halt to construction of a new sports stadium, following an accident that killed two workers, creating doubts about the venue for the soccer World Cup opening game in 2014. The stadium is expected to cost around $353 million, but it may not be finished on time:

Press reports Friday said Brazilian authorities were already searching for “a Plan B” in the event the São Paulo venue is unavailable.

A spokesman for Brazil’s 2014 World Cup Organizing Committee, however, said, “It is premature to talk about a Plan B when we have not yet fully assessed the situation at Arena Corinthians.”

other aspects of the project were moving ahead. Corinthians on Friday signed a loan agreement with state-run mortgage bank CEF for 400 million Brazilian reais ($172 million). The money will pay for the remaining construction work on the stadium.

What do the unions say? (emphasis added)

A labor union representative, although highly critical of conditions at the site, said the accident will cause a delay in the construction schedule of only eight to 10 days. “The cause of the accident was human error,” said Antonio de Sousa Ramalho, president of the São Paulo Construction Workers Union. “That can be fixed by putting adequate management procedures in place. Personally, I have no doubt Arena Corinthians will be the venue for the World Cup opener.” 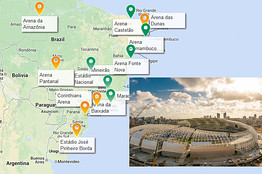 I predict Arena Corinthians will hold the opener.

There are a total of six stadiums not yet completed. The question is, will all of them be ready on time? (click on photo for large view)