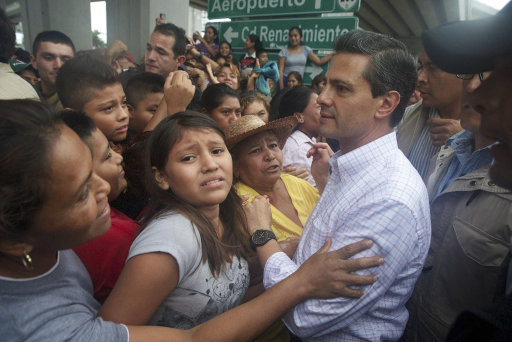 Tropical storm Manuel was only part of the one-two punch that hit Mexico. On the Gulf coast, Hurricane Ingrid made landfall Monday before dissipating as it moved inland.

Interior Minister Miguel Ángel Osorio said the number of people confirmed killed by the storms had risen to 47, including 27 in southern Guerrero state, home to Acapulco, and 12 in the Gulf coast state of Veracruz. Mr. Osorio said 39,000 people had been evacuated from their homes, and that 23,000 remained in temporary shelters. At least 1.2 million people were affected by the storms, which brought rain to close to three-quarters of the national territory, officials said. Collections of food and other supplies were being made for distribution in the worst-affected areas.

Acapulco was one of the hardest hit. Pictures from the resort showed surreal scenes, including people getting around flooded avenues on Jet Skis and a crocodile that escaped from a nearby lagoon that had overflowed trussed up on a road.

Oil pipelines damaged in a mudslide are being repaired.