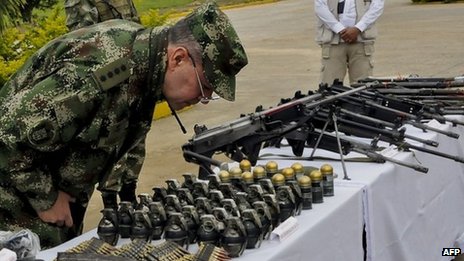 What the hell?
The president of Colombia is not insisting that the Marxist–Leninist narco-terrorist guerilla that has murdered thousands disarm immediately?
Colombia Santos: Farc ‘to keep weapons until referendum’
Colombian President Juan Manuel Santos has said the Farc rebels would be allowed to keep their weapons until a peace agreement was ratified.

Mr Santos said no-one could expect the rebels to give up their weapons before a peace accord had been given final approval in a referendum.

He added that a ceasefire would be implemented once a deal was reached in talks under way in Cuba.

There’s not going to be a referendum until at least Marcht next year.

Considering that last month the FARC rejected the referendum proposal, while continuing to attack the Colombian army (two weeks ago they killed 13 soldiers), one must pause and wonder, what is Santos thinking?