We talked about this in yesterday’s podcast: 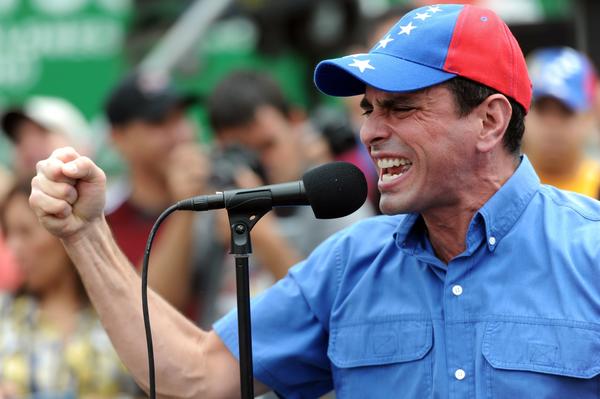 The Supreme Court of Justice described the appeal as “inadmissible”.
…
In her ruling on Wednesday, Justice Gladys Gutierrez said the opposition had not not offered “sufficient proof” to back up their allegations.

The 10-point appeal had been lodged by Mr Capriles, the opposition coalition and several citizens.

After dismissing the suit, judge Gladys Gutierrez fined Capriles US$1,500 for his for “offensive and disrespectful allegations” against the court and other officials, and,

Also on Wednesday, members of the armed forces’ military counterintelligence unit raided the residence of Oscar Lopez, who serves as Capriles’ chief of staff in his capacity as governor of Miranda state. Lopez told reporters afterward that those conducting the raid took personal documents, telephones and computers.

Lopez said he didn’t know the reason for the raid, but said it may have to do with accusations lodged by National Assembly members of the PSUV party headed by Maduro alleging unspecified irregularities.

But the signal of intensified repression and the reinforcing of the thugs group in power come from inside chavismo itself. Not only there will be no primary nor discussion over the mayor candidates inside chavismo but we learned that ALREADY 33 outgoing mayors will not be allowed to go for reëlection and are demanded to support their appointed wanna-be successors. Stalinist purge stand trial light version for our times.

And it is not over as all the candidates have yet to be announced. If there are flash in the pans in the new nominees to districts that are more than likely to be lost by chavismo, it also happens that mayors of safe districts are also given the boot (1). For example in Vargas mayor, the current holder, which I have reliable witness of his particularly corrupt administration, has been booted. Alexis Toledo will be replaced by General Carlos Alcala Cordones. Who is this general, for those of you new to this game?  He has already been featured unfavorably in this blog, but what is the most damning is that he is in the DEA/US lists of Venezuelan involved in international drug traffic. Imagine that this just retiring general, but excessively connected with the thuggiest part of the regime, will be controlling the district with the main port and airport of Venezuela, and surely will decide what military is named to control these installations, an officer that will report in all likelihood only to Cliver, or whomever Cliver reports to in Cuba or at Cabello’s office…

The surprise today was not that the Constitutional Hall of the Venezuelan Supreme Court rejected as inadmissible Henrique Capriles’ challenge to the election results in a one page decision. The surprise was that besides the legal travesty, the Court fined Capriles the maximum amount for insulting authority with the challenge and accusing the Court of being partial to the Government. The Court also asked the Prosecutor to have Capriles investigated for these insults.

Capriles is declared guilty and fined, arrests are made, all signaling a new wave of political repression.

It’ll get worse. Don’t be surprised if Capriles is arrested.