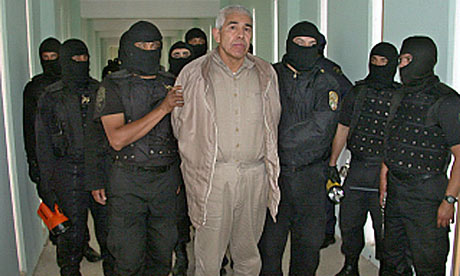 In what can only be described as a slap in the face to the US, last Friday Mexican authorities released drug kingpin Rafael Caro Quintero, who founded the disintegrated Guadalajara Cartel and was the man behind the torture and killing of (DEA) agent Enrique Camarena. Now the U.S. asks Mexico to detain freed drug lord so can be extradited

The United States has asked Mexico to detain freed drug kingpin Rafael Caro Quintero to face charges brought decades ago by a U.S. court, the Mexican attorney general’s office said on Wednesday, setting the stage for a formal extradition request.

Caro Quintero, one of the infamous godfathers of Mexican drug trafficking, was freed last week from the Puente Grande prison after serving nearly three decades of a 40-year sentence for ordering the 1985 murder of undercover Drug Enforcement Administration (DEA) agent Enrique Camarena.

The ruling was a bitter blow to the DEA, and the United States said it would not cease in its efforts to bring Caro Quintero to justice on home soil.

Good luck with that: Not only does Mexico forbid extradition in cases where the accused may receive a death penalty, more ‘Fast and Furious’ weapons are still appearing at Mexico crime scenes

Three more weapons used in Operation Fast and Furious have been recovered at crime scenes in Mexico, Fox News confirms.

first reported earlier this week that the guns had been tracked down. According to Justice Department documents, all three are described as WASR-10 .762-caliber Romanian rifles and all three were traced to a gun shop in Glendale, Arizona. The exact locations where the guns were recovered, and what crimes the guns may have been used in, was not immediately clear.

The documents further state that two of the three guns were purchased by Uriel Patino, who is believed to have purchased 700 weapons with encouragement from the Bureau of Alcohol, Tobacco, and Firearms. The third was bought by Sean Steward, who was convicted on gun charges in 2012.

Hundreds of Mexicans have been killed with F&F weapons. To say that doesn’t sit well with Mexico doesn’t begin to describe it.

Edward Heath, the DEA’s regional director for Mexico at the time of the Camarena killing who was present during the identification of the agent’s body from dental records, said on Saturday that Caro Quintero’s release reflected a broader lack of cooperation with the US from the new Mexican government, in contrast with the administration of former president Felipe Calderón. “There’s some collusion going on,” he said. “This guy is a major trafficker. This guy is bad, a mean son of a gun.”

Caro Quintero has gone into hiding, and now, “acting on a request from the United States”, the Mexican government wants Caro Quintero detained, in the spirit of closing the barn door after the horse has bolted.