The first Cubans to arrive in Miami from a notorious migrant detention center in Bahamas this month alleged Friday that guards regularly beat some of the male inmates and sexually abused some of the women.

One of the women repatriated from the center to Cuba earlier this month arrived pregnant by a guard, according to the Democracy Movement, a Miami group that has been helping the undocumented migrants detained in Nassau.

The movement led a string of protests against the Bahamas government this summer after detainees at the Carmichael Road Detention Centre smuggled out cell phone images of inmates sewing their lips together in protest and an alleged guard kicking prisoners.

Haitians have also complained about the conditions at the infamous Carmichael Road detention center for many years.

The Chong Chon Gang, which is undergoing a thorough inspection from Panamanian authorities, had a cargo container full of euro and dollar bills of assorted denominations, according to Venezuelan journalist Nelson Bocaranda.

The currency will be tested to see if it is counterfit, as expected (h/t Babalu). 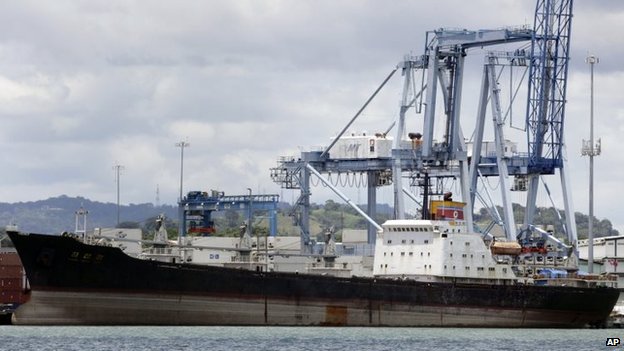 talking about the US-Latin America stories of the week.

Live now, and archived for your listening convenience.

Ramon Negron Colon, an attorney for Jose Figueroa Agosto, was charged with conspiracy to commit money-laundering. U.S. Attorney Rosa Emilia Rodriguez said Negron had received at least $590,000 in cash for the scheme, though there is no evidence that any bribe was actually offered to any official.
…
Rodriguez said that more than a year before Figueroa’s return to Puerto Rico, Negron tried to obtain up to $3 million to help nullify Figueroa’s conviction through bribes, and had received an initial payment of at least $440,000 stuffed into a suitcase.

After Figueroa’s 2009 arrest in Puerto Rico, Negron told his client he would request a new trial, and said it would be granted if the presiding judge were offered a $300,000 bribe, according to the indictment. Authorities said Negron received an additional $150,000 in cash, only to return $125,000 of it in 2011 after failing to secure the new trial.

Huge operation, with more than 3 million tons of drugs seized – and the lawyer’s now in jail.

What does it remind me of? 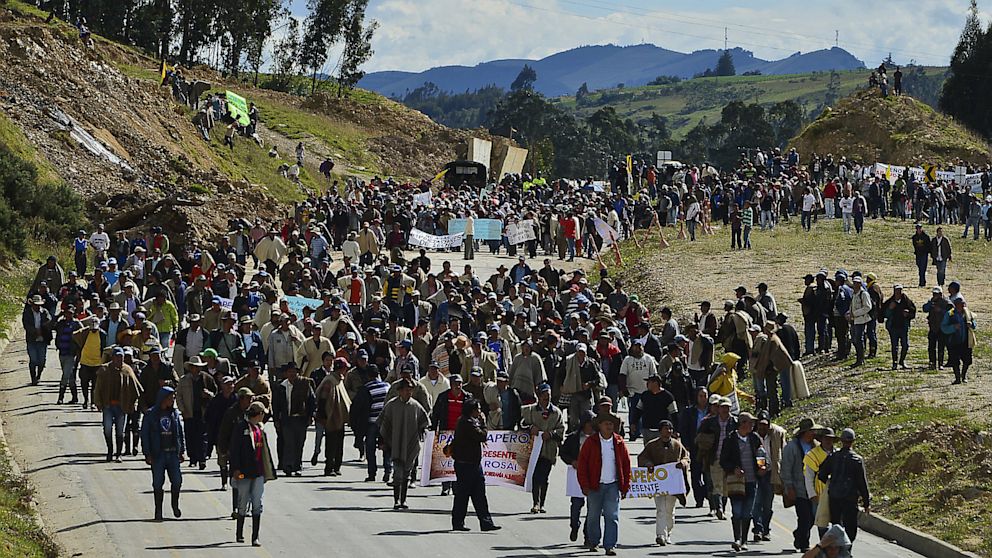 Eight days on, No deal on Colombia farmers’ strike after night of talks

Representatives of Colombian farmers’ groups and government ministers say they have not yet been able to reach a deal to end a 10-day strike.

The two sides will reconvene on Wednesday after they failed to reach agreement after nine hours of talks.

The protests by livestock, dairy and crop farmers have been paralysing parts of the country.

The demonstrators accuse the government of running the agricultural sector into the ground.
…
On the agenda are the high cost of fertilisers and other key farming materials, and how farmers are being undercut by cheaper imports and agricultural products being smuggled across the border from neighbouring Venezuela and Ecuador.
…
The farmers have been backed by some student and trade union groups which have held demonstrations in the capital Bogota and the city of Cali to show their support.

The government has responded with calls for composure and accusations of outside manipulation. Since the strike began on Aug 19, President Juan Manuel Santos has tried to minimize the strikers’ actions, giving statements that have only served to taunt protesters and bring together union leaders.

“The so-called agrarian strike does not exist,” Santos said on Sunday. Acts of violence, the president said, were caused by guerrilla infiltrators – an often-used government claim — who wanted to destabilize the country and hamper dialogues with troubled agrarian sectors. “It’s just 10 or 15 people. The situation is under control and problems are being resolved,” Santos added.

Five people have been killed and hundreds more have been injured in the numerous skirmishes that plague the countryside, according to police reports. Students in public universities have attacked authorities with rocks and homemade bombs. Protesters have burned cars and trucks, and an unknown group in Boyacá, a historically peaceful agrarian state located a few hours north of the nation’s capital, reportedly placed a cable line across a road late in the afternoon to kill an unsuspecting motorist that drove by. Red Cross medical missions have been detained at roadblocks, and there have been disturbances in more than half of the nation’s states.

Uribe accused Santos of ignoring farmers while favoring the FARC (with which Santos is negotiating). “The government has forgotten to stimulate local industry. . . coordination between [agricultural] producers and manufacturers has been neglected.” Uribe didn’t stop at that; he asserted that the Santos administration is leading the country to “anarchy towards a path to Castro-Chavismo.”