The Economist sizes it up:
Venezuela’s government
A circus without a ringmaster
Radicals, former soldiers and Cuban spies jostle for control of the Venezuelan ring 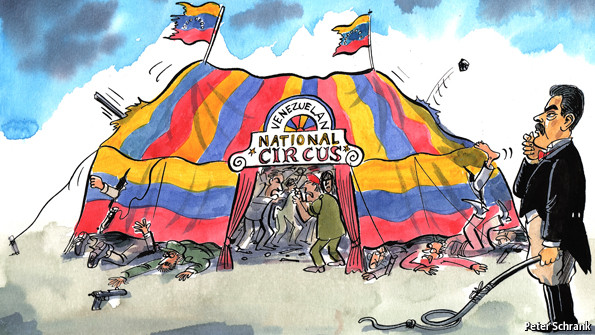 During the presidential election campaign, Mr Maduro was seen as the favoured candidate not just of his predecessor but also of Cuba, Venezuela’s closest ally. A month ago, however, Mr Cabello made a three-day visit to Havana, holding meetings with President Raúl Castro and his brother, Fidel. The trip came shortly after the leaking of the Silva recording. No one knows what sort of deal the Cubans may have struck with Mr Cabello. For the moment, he and Mr Maduro are locked in a macho Latin embrace, of the kind some say was devised as a way for each man to frisk the other for weapons.

Maduro was in Havana reviewing the promotions of military officers of the Venezuelan Armed Forces (h/t Babalu). Cuban intelligence officers are tracking Venezuela’s opposition. If there is a ringmaster, he’s most likely Cuban.

I mentioned a while ago that Maduro may not last long in power, and his successor may be Cabello, not Capriles. Only time will tell.

Over at the Carter Center, they’re having qualms over the quality of the voting conditions and whether every registered voter is able to vote one time, and only one time.

But fret not, unctuous Jimmy had already given his Seal of Approval to the Venezuela Election.